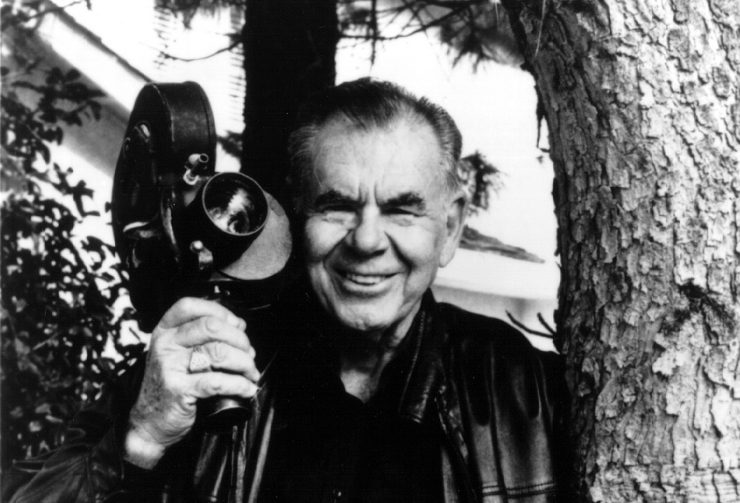 The relationship between sex and filmmaking in mainstream Hollywood was dragged out into the open in 2017. But for the late ’60s-’70s independent filmmaker Russ Meyer, combining the two acts was the entire purpose of his career–and he did not exactly keep it a secret. Instead, he sought out like-minded actresses to fulfill his fetishistic fantasies on film, resulting in utterly bizarre (if well shot) exploitation cinema. In this interview, he goes into detail about his obsessions and how they came to be; for more about his opus, Faster Pussycat! Kill! Kill!, read this feature story.

Do you think your critical regard has risen over the years?

It’s about the same. I think it’s gone on just really strong, and to find it jumping oceans and continents and so forth is great. There they are, lookin’ at it! The Japanese are marvelous about it–they’re really into these big ladies. I recently did a fashion layout for a magazine called H, which is a leading Vogue of Japan. They wanted me to find two of the biggest-busted girls that I could get, and photograph them in a way that they might pose in a fashion way. And I took along a fashion consultant that helped me in that area for the posing. And one of the girls was Colt 45–she should be known in the hills of Kentucky, she’s out down there. And there was another one named Lily Xene, who said in an article in one of the magazines that I should be doing a film with her, and not fooling around with girls that were of a certain configuration because she’s got ’em all whipped.

So I took pictures of these two girls, with a Japanese consultant, and the costumes were all too small–because of the Japanese people. So they suggested that we rip and tear the costumes and just kind’ve hang ’em on the girls and their protuberant bazooms. And the pictures were great. I had another camera man shoot pictures of me shooting, and I’ll include that in the film. I keep getting these extra cuts that are really worthwhile, but both these ladies were spectacular–I mean, they were traffic stoppers. We always try to go to a place where it’s quiet; this happened to be in Ridgecrest, where China Lake is, where the Navy operates–and we worked under some severe conditions, 130 degrees. We had about five Jeeps that were enclosed, kept the AC going, and the girls hung in there. It was great.

What are your feelings on breast implants?

Oh, no, no. I like the girls that defy gravity, that’s it! When they’re in their 40s or early 50s, they’re still outrageously abundant, and just a lot of fun. Oh no–I’m all for that, I’m tellin’ ya. You see, the new way of doing it, like in the case of Melissa Mounds who is a good example–she started the whole thing of having them anchor the bag well back within the breast–so that you can dig your fingers in there up to four to five inches and not encounter a foreign substance. And here they are: cantilevered, outrageously abundant, and defying gravity. And it sure generates a lot of, shall we say, carnality on the part of a person like Meyer.

Another thing I always did before they had that was to find girls who were pregnant, because generally it all goes to their chest. And it worked fine. Lorna Maitland, who was extremely abundant through the fact she was carrying a child. And many others–I always searched for that, put ads in Variety saying that: “Meyer is searching for a new star, but preferably somebody who is at the very beginnings of motherhood.” Boy, that drew a lot of fire! “I knew he was no good!”

What do you think about censors?

Well, the one censor is plenty. He is the censor–he doesn’t want to be referred to as the censor, but he has the ratings that affect whether or not you can advertise in a newspaper. You can’t have something like an NC-17, it’s bad news. So he’s a censor, plain and simple, no question about it–the most evil, mean censor we have in the States today.

Are there any movie makers you like these days?

Not particularly; I don’t go to films at all. I’m too involved with my own thing, and looking at a moviola all day then go see a movie, no. One thing that tires me is these so-called “sex shows” they put in, what do they call it, Miramax–you know that stuff? And we approached them about running mine, but they wouldn’t take ’em, said the breasts are too large. There they are, see? Although, Beyond the Valley of the Dolls has played repeatedly–largely because it was a Fox picture. I’m pleased with that, and the actors are tickled because they get their residuals–every month they get some good money. So as far as me seeing or thinking about any films that may come about, it’s not my interest.

Do you have a favorite Russ Meyer film?

Yeah, Beneath the Valley of the Ultravixens with Kitten Natividad. Kitten and I had been very close, if you know what I’m talkin’ about. We just did it in between–the very thing that I always said, “No, Meyer, you shouldn’t fool around, all those vital juices will be spread about.” But no, instead we just did it all the time. I mean, we shot inside, and we’d forgo lunch and have sex–wonderful, riotous, noisy sex… laughing and scratching. Yeah, that was fun. That really worked out wonderfully.

Are we talking the whole cast here?

No, no–that was just one girl. Thanks a lot! No, she’d have cut off my agates if she caught me fooling around with anybody else! She was a great lady! Oh ho ho ho!

Is it true that you didn’t allow sex on your sets?

Well, I tried it. Simply because when we were on location, they’d want to sleep late–they’d be tired from the ardors of the day. That was one of the main reasons, by and large. But oftentimes, I was extremely deceitful, like with Baba Bardot. I’d go to great lengths to make it quiet, but I’d be discovered. I always felt I had to keep that attitude up about seeing that people towed the line. But on the other hand you can’t. If you’re working at a major studio, they can go home with anybody they want. It’s all part of Meyer’s modus operandi.

Is Kitten your favorite leading lady?

She was, yeah, I would guess so. The very nature of her configuration, the fact too that she was completely oversexed. She could just go and go and go. It was just marvelous. You really had to measure up to this girl, or you caught hell.

Who was your first large-breasted love?

I was called to the attention of a stripper by the name of Margie Sullivan, who was oh so big without implants or anything–I only say that simply because it was before implants; if implants were around she’d have gone for it. But she was just enormous. If she moved too fast, she could throw herself right down to the deck–the centrifugal force was enormous! And I dragged my schoolchums to go and see Margie Sullivan dance. We all thirsted for her, and her configuration. Of course, we never did have that pleasure.

One time I did–when I got into the Army, I went on a furlough to Kansas City. My mates had started a little late, so I went down there and I saw an ad saying Miss St. Louis. So I went down there and saw this great lookin’ blonde who was performing. Of course, I didn’t have the balls or the guts or wherewithal to approach her. It wasn’t until four years later, after the war, I saw an advertisement for the same girl in a burlesque show here in Los Angeles. So I went to the backstage–I knew one of the comedians performing because I had used him in a film. So I used him to meet her. I met her, and she was great for going up Mulholland Drive and giving me service in a convertible with the top down. Mulholland Drive was a famous place to have a good time on, overlooking Los Angeles. So when we did it, something was fulfilled. I mean, here I had this dream for four years, and all of a sudden I was straddling the girl in a convertible. That was gratifying as hell! She had enormous, wonderful, cantilevered breasts, and at the same time having great ability with fellatio and the old in-and-out. And there you are! That was something that fulfilled my dreams.

Do you have any sexual dreams that you’ve yet to fulfill?

No, no, just the next big one that comes along. The trouble is, nowadays, it creates problems. I had one girl for about six years, she was really special–totally and completely oversexed. She would drive to the airport nude in the car, so that she wouldn’t have to take any clothes off. She would be absolutely naked, drive the car, pick me up at the front. She literally almost crashed into her garage door, ran upstairs, and there she was: spread-eagled. Best you just get your damned clothes off and jump on her in a flying leap–wow! She was just an incredible woman.

Do you find that you’re still as lusty as you ever were?