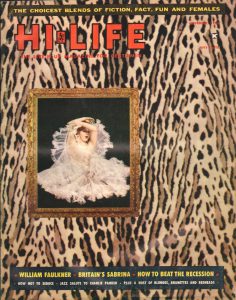 I don’t know who Julie Ross is, or whether that’s her real name. (Or even if she is still alive.) Nevertheless, I’m a fan of her essay in the November 1958 issue of Hi-Life (“The Live-It-Up Magazine for Gentlemen”), forthrightly titled “Why Johnny Can’t Make It.”

If you’re not familiar with the publication, it was one of many 1950s girlie mags that were quickly established in Playboy‘s wake, hoping to follow its route to success. Not many of them made it, typically lacking in consistency or quality, whether in photography, writing, or paper stock. But some of their editors did at least try to emulate Playboy‘s formula of “sophisticated” sexy stuff, so you might find random examples of interesting design or illustration. And, sometimes, really good writers getting their first break.

Although framed as a “sex tips for guys” article, Ross’ piece is actually a witheringly witty piece of social commentary. Despite the myth that women of the 1950s were sexually inhibited, she’s absolutely candid about her appetites: “I like sex. Now that’s as simple, natural, and straightforward a statement as I can think of. But it certainly must come as a shock to the vast majority of American males, who like to cloak their preoccupation with the subject in a ludicrous smokescreen of hypocritical poses.”

She then proceeds to shred male sexual archetypes (“the Good Boy,” “the Neurotic,” “the Big Brother”) and reveals how sex can be reduced to a miserable ritual of miscues, often due to men’s personality dysfunctions. (But she also offers helpful advice after the skewering.) Rather than retype it, I’ll share it here as a gallery (presuming the copyright was never renewed; I’ll remove it if not).