FUTURAMA: A tour of GM’s vision for the all-new, redesigned America of 1960

In 1939, the future didn’t look so bright. The U.S. was still mired in The Depression and Hitler’s invasion of Poland foreshadowed world conquest and inevitable war. Yet, despite of these bleak times, the most spectacular celebration of optimism ever conceived was held in Queens: the New York World’s Fair.

Massive in every scale imaginable, the 1939-40 World’s Fair created a small city of exhibits by countries and corporations to show people “The World of Tomorrow.” Technology, architecture, art, fashion, food, entertainment, and hundreds of consumer products were reimagined as they would appear in the future. One of the most stunning exhibits was General Motors’ Futurama, an $8 million multimedia extravaganza created by famed industrial designer Norman Bel Geddes.

Visitors sat in high-backed chairs that whisked them into the world of 1960, a time of superhighways, radio-controlled cars, massive skyscrapers, and suburbanization. After flying over precise models of this futuristic landscape, visitors left their seats and walked into a full-scale replica of the last model on their trip, an actual city intersection; upon their exit, they received a badge that declared, “I Have Seen the Future.”

And in many ways, these visitors did see the future. GM’s self-fulfilling prophecy that the automobile would dictate our future way of life was all too accurate. Suburbia flourished and many urban centers were indeed “replanned around a highly developed modern traffic system…” as the national highway system was constructed. These developments were not nearly as well planned and executed (or landscaped) as GM imagined, yet this Futurama brochure does at least give us an (unintentionally) foreboding glimpse of the “urban renewal” yet to come: “Whenever possible the rights of way of these express city thoroughfares have been so routed as to displace outmoded business sections and undesirable slum areas.” 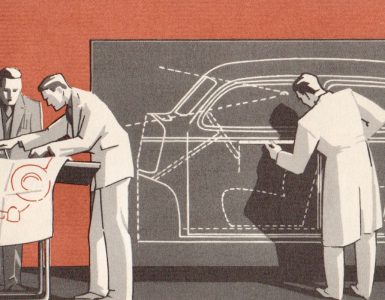 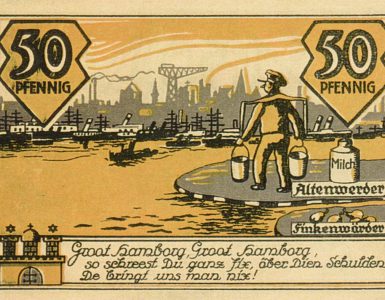