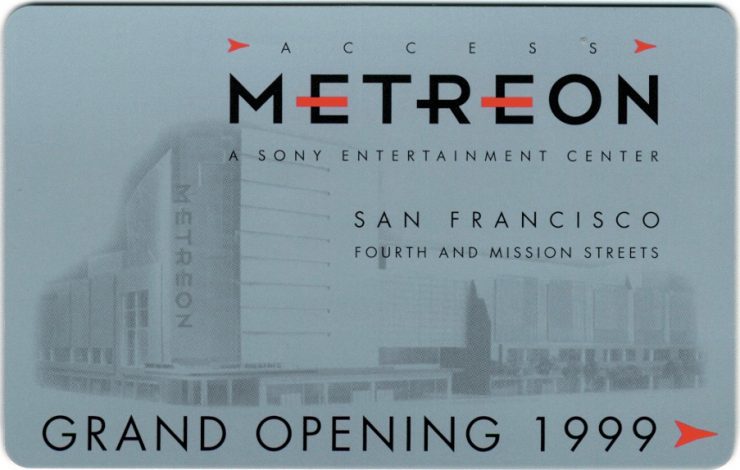 Future World: the failure of Sony’s Metreon, its would-be playground for the data age

Sony’s Metreon center in San Francisco was designed with high aspirations: It was to be an entertainment complex unlike any other, a shortcut to the future. Clearly, someone in the corporate chain of command had a sense of adventure—including a video game arcade based on the works of French comics illustrator Jean “Moebius” Giraud is no sure investment for any shopping center. This creative vision of commercial appeal ultimately failed, changing ownership a few times and reducing the Metreon to being just another mall like in any other city. While I found my visits to the Metreon to be unsatisfying, there is nevertheless something to be admired about Sony’s attempt to try something new-ish.

As you survey the gleaming industrial facade of Metreon, Sony’s $85 million Entertainment Center in San Francisco, the first thought that comes to mind is “headquarters.” With its textureless metal walls and cold glass indentations, it bespeaks efficiency, order, and a general air of antiseptic cleanliness. It does not whisper invitation so much as hiss a demand: This is the future, and you damn well better pay attention.

Metreon was designed by its two architectural firms (Simon Martin-Vegue Winkelstein Moris and Gary Edward Handel + Associates) to be an attraction in itself, a sort of Disneyland for the electronically advanced. The name, according to Sony’s press releases, is a fusion of the Greek words “metropolis” and “odeon”–in other words, a big-city meeting place. With its decidedly high-tech atmosphere, Metreon is clearly intended as a statement on the future of public architecture, a new city center for the new millennium, as it were. But what the heck is it, really?

Inside the 350,000-square-foot facility (which opened in June of 1999), you discover a fragment of our inevitable Blade Runner destiny: a four-story center of cool, glistening window displays and low-level lighting mixing uncomfortably with the natural sunlight peeking in. The ceiling is adorned with arching spans of bare girders and strange contraptions of fabric stretched between steel frames (New Age umbrellas? Pop art constructs?). Dotting the walls are HAL 9000-like sentinels, special cash machines of wavy brushed steel topped with little glass shields; Metreon has its own currency. Why? I can’t think of any particular reason other than it seems cool: You feed the obelisk regular old cash and it spits out your very own silver Metreon debit card. (Perhaps this way you’re less conscious of just how much money you’re actually spending on video games–”It’s only a few hundred Metreon credits!”)

People mill about, expectantly walking in circles, as if waiting to be told what all this is about. Clearly, it’s important, beyond anything we’re familiar with, a peek into a brave new world of…what? Certainly, your first inclination is to conclude that Metreon is a shopping mall. Look one way and you’ll find a number of impressive corporate entities: Microsoft! Sony! The Discovery Channel! But then look the other way and you’ll see attractions based on the work of some of the world’s most beloved illustrators: Jean “Moebius” Giraud! David Macaulay! Maurice Sendak! Throw in a state-of-the art movie theater complete with IMAX screen, an upscale food court featuring Asian and Californian cuisine, and you’ve got one of those indoor amusement parks, right? Sort of…both.

The much-vaunted “first-time-out-of-the-box retail” stores are mostly exercises in corporate branding rather than places where you’d actually want to go and shop. “C’mon, honey–let’s go to the microsoftSF store and pick up an operating system,” you can only imagine PC users telling their spouses. Indeed, the microsoftSF store seems like one big, candy-colored tax write-off for Mr. Gates. Adorned in the cool green and white and tan pastels of Microsoft’s magazine ads, the shop elevates the mundane boxes of typical Microsoft software into boutique selections. Arrayed like rare baubles inside glass cases and artfully arranged atop shelves, the ubiquitous Windows 2000 CD-ROMs are studied by customers who ooh and ah over the very stuff they could buy for less at Wal-Mart. Even more mysterious are the random electronic devices also residing in the glass cases–what is that pen-like object with the antenna? Is it some sort of new miracle pocket computer offered only by Microsoft? Is it a glimpse of the future of telecomputing? No one seems to know, although perky attendants swoop down upon you as you cross the threshold, demanding to know if you need help with every step you take.

Likewise, Sony Style is a fashionable, brightly lit electronics store as we might imagine in the world of Stanley Kubrick’s 2001: A Space Odyssey. Peopled by clean-cut models in matching dark suits, the “high-touch entertainment boutique featuring all things Sony” is a place where tourists stroke the plastic surfaces of Sony products and admire their design…rather than actually buying one. Never before have Discmen looked so sexy. And right next door is the PlayStation store, which offers (yes) PlayStation game systems and discs…just like the ones you can get at Target. But with video kiosks and a circular bar of monitors open for anyone to play (love the glass floor!), it makes considering the purchase of a PlayStation game seem as stylish as choosing a new cologne.

What Sony is subliminally programming into consumers is that these products are much more important to their lives than they may have previously thought when passing them by at the grimy aisles of Circuit City or Toys “R” Us. Here, they are part of a particular lifestyle rather than merely being useful electronic devices. (For further reinforcement, please subscribe to the glossy Sony Style magazine–which is all about integrating your life into the Sony product line–available at newsstands everywhere.)

The Discovery Channel Store: Destination San Francisco is definitely more appealing, something along the lines of PBS’ Store of Knowledge, with all sorts of puzzles, games, models, books, videotapes and the like. Customers look much less reverent here, and often play with the products, no doubt getting fingerprints all over them. Similarly, Metreon Marketplace on the facility’s ground floor attempts to dissipate the air of corporate shilling by presenting kiosks supposedly manned by “Bay Area artisans and merchants selling one-of-a-kind treasures”–in other words, T-shirts and crafts of the sort tourists like.

But is all this enough to bring the hoped-for 11,000 shoppers into Metreon on a daily basis?

No. And that’s why there are the attractions, which make much more sense than the image shops when it comes to drawing in people–though perhaps not to the point of fostering the Disney-like image Sony clearly wants.

Where the Wild Things Are is an “interactive adventure” based on Maurice Sendak’s award-winning book of the same name. Kids go on a journey with the book’s hero, Max, to the land of the Wild Things; there they can see goblins, a bubbling cauldron, a hall of mirrors, and an interactive 17-foot-tall “Wild Thing.” (Which may sound similar to the old state fair fun house, but it has decidedly higher production values.) The Way Things Work attraction–”In Mammoth 3D presented by Mercury”–is based on architect and illustrator David Macaulay’s books that examine exactly that. Here, guests find a robot host and a three-screen, 3-D video presentation. According to Sony, the show features a direct videoconference connection with Macaulay at his workshop in Rhode Island, where he draws on his “Virtual SketchPad” to illustrate the operating principles of everyday objects. (Gosh, how many times a day does poor Macaulay have to do this? He’ll never write another book again.)

The most interesting attraction–and probably the one with the shortest shelf life–is The Airtight Garage, a video game parlor taking its inspiration from the work of French science fiction illustrator Jean “Moebius” Giraud. Although Giraud may not be as obvious a choice as Sendak and Macaulay–he’s mostly known to American audiences through Heavy Metal magazine and translations of his graphic novels–he’s nevertheless one of the world’s most unique visionaries of modern science fiction illustration. And by recreating his design sense and mythos in an arcade setting, the Metreon braintrust has managed to create an attraction that appeals to both children and adults. With its spooky lighting, deco-industrial piping, and dreamy faces popping out overhead, The Airtight Garage appears immediately cool and fun.

The multiplayer video games based on Giraud’s characters and settings are fairly entertaining…for now; it’s hard to image the Windows-based graphics remaining current for long in today’s hyper-accelerated game development scene. Committing a multi-million-dollar arcade to using what may turn out to be yesterday’s graphics chip technology (in a week or so) is seemingly a tad foolish, but that’s what corporate mega-partnerships are for. Will gamers still pay $5 a game to play Badlands when their Nintendo GameCube at home can kick its ass? Perhaps Metreon’s planners will refresh the games every few years or so, though it seems like an expensive proposition.

But at the end of the day–after you’ve taken in a movie at one of Metreon’s THX®-certified theaters equipped with Sony Dynamic Digital Sound® (SDDS®), gotten some stir-fry veggies at the LongLife Noodle Company and Jook Joint™, maybe picked up a book at The Way Things Work Shop™, and enjoyed a fine game of Quaternia™–maybe Metreon isn’t so mysterious after all. If indeed megacorporations are the nations of the new world, then Metreon is just one more capitol building for the republic.