Two and a half minutes into “Cold Sweat,” James Brown seems to be searching for something. His slow-burn vamp, recorded in 1967 at King Studios in Cincinnati, has been chugging along fine behind the chicken-scratch guitar of Jimmy Nolen, not to mention the staccato horns punctuating Brown’s anguished exclamations: “I wake up…in a cooold sweat!” Still, the tune has not yet reached that crescendo of desire, swagger, and pure sex that marks Brown’s classic numbers, and you get the sense that maybe he’s realized it just then. But he gets an idea; or maybe it’s something he’s practiced onstage dozens of times already.

And Maceo Parker does exactly that, bending his tenor sax into a soulful solo that flows up from the percussive rhythms and into its own fluid state, adding a warm, sexy urgency to the pulse of the song. It’s not the kind of solo you’d hear on a jazz album; it’s altogether too frisky, too suggestive to be acceptable in straight-ahead bop circles. The tone is closer to R&B, but like the song it’s adorning, this solo exists apart from its musical predecessors—it’s not only evocative, it also makes you want to shake your ass.

But it’s funky like few songs were before James Brown began hitting his stride in the early ’60s with Maceo on the sax. So what makes a tune true to the funk?

“It’s got a beat that goes ‘Boom-bop-boom-boom-ba-bop-bop’—a lot of drummers set the tone for whether it’s gonna be funky or not,” Maceo Parker explains, recalling the earliest music he heard that could be described as being funky, and he proceeds to sing. “There was a tune called, ‘Get out of my life, woman, you don’t love me no more…’ Boom-ba-boom-boom-sca-boom-boom-da! Don’t remember who did it [Note: Allen Toussaint], though we used to call that funky. But as far back as I can remember, somebody was doing something funky.”

There have been only three true Masters of Funk in the history of the genre, and Maceo Parker has played with all of them at turning points in music history: First with James Brown, the architect of funk, with whom he earned first-name billing on stage and in songs through the ’60s; then with George Clinton and his wild P-Funk empire of the ’70s; and finally with Prince as he renewed his career in the early 21st century. In between, he’s forged his own solo career, cementing his reputation as the greatest funk sax player of all time.

It’s a career that he trained himself for since his childhood in the ’50s. Even before there was a particular style of music called funk, he wanted to play it. Inspired by his uncle’s group The Blue Notes, Parker and his two brothers (Melvin on drums and Kellis on trombone) formed The Junior Blue Notes at ages 10, 11, and 12, and looked for inspiration on the streets of Kinston, N.C.

“We wanted to hear everything that was recorded—all styles, all everything—so that’s what we did as kids. We’d go around the neighborhood: ‘Have you got any records we can borrow? Okay, we can’t borrow them, do you mind playing them? What’s this?’ Before homework, chores, and all that stuff, we’d just listen. From that, we heard everything, everything, everything.”

Once he entered Agricultural and Technical College of North Carolina in Greensboro, he already had years of performing under his belt, playing nightclubs since the sixth grade. Studying music in college, he soon had an epiphany.

“After my first year in college, I was thinking, ‘Why is it that everybody wants to play jazz? Nobody wants to play funky.’ So I just started looking at it like this: We’ve got 35-40 cats over here in this room all wanting to be professional jazz musicians, maybe being taught by the same person or learning from the same book. At the end of the day, all 40 of them are going to sound alike. I didn’t know if I wanted to sound like everybody else.”

So Parker chose the room with the three guys who wanted to play funky. “I said, ‘You know what, man? I think I could be recognized sooner over here with these three people rather than being over there with 40 people.’ So that’s what I did. I think I’ll just go for the funky side, and be really, really, really good at that—and I’m bound to be heard. Somebody’s gotta hear me.”

As it turned out, it was his brother Melvin who got heard first. In 1962, Melvin was playing in a band called Apex at the El Morocco club in Greensboro—on the very same night James Brown was performing at the local coliseum. Wanting to hang out after his own show, Brown happened to pick the El Morocco for his late-night stop and heard Melvin’s decidedly funky drumming. He was so impressed that he had the club’s owner introduce him—and offered Melvin a job with his band on the spot. Perhaps shocked at this sudden opportunity, Melvin replied that he was still in school; Brown promised him that he could have a job any time he left school.

Flash forward over a year later, and James Brown is back at that coliseum—and Melvin has decided he’s ready to join up, so he’s waiting backstage. With his brother Maceo, who also wants a job. Brown kept his word and hired him right then and there; and then Melvin added the kicker: “Oh, excuse me, Mr. Brown, I’d like you to meet my brother. He’s a saxophone player and he needs a job, too.”

“Mr. Brown says to me—the first thing he ever said to me in life was, ‘Do you play baritone sax?’ And I start smiling. Now, there’s only two ways to answer that question: yea, nay; affirmative, negative; yes, no. If I say no, end of story. I already see him turn away and walk off. I’m talking to James Brown and he’s asking me a question? I can’t let this conversation end! I’ve got to say yes! Even if he had asked me, ‘Do you play saxophone standing on your head?’ it would’ve been ‘Yes, sir!’ But the way it went was like this:

“‘Do you play baritone sax?’

“Now, I really have got a smile on my face.

Brown’s generosity that night resulted in a collaboration and friendship that spanned some 20 years of radically original music with songs like “Say It Loud—I’m Black and I’m Proud,” “There Was a Time,” “Give It Up or Turnit Loose,” “Mother Popcorn,” “Funky Drummer,” and more. Maceo’s searing solos expanded the vocabulary of Brown’s funk, not only exemplifying the percussive sound that Brown engineered, but also sliding in melody and groove with his expressive sax licks.

Parker would come and go from Brown’s band over the decades; his stint with George Clinton’s never-ending P-Funk circus of Parliament/Funkadelic in the mid-’70s begat another legendary advancement of the funk, if not Parker’s career. “When I started looking back on it, I didn’t need Bootsy Collins or George Clinton,” Parker says. “I didn’t need that, not musically, not really. But those were fun years, I was having truckloads of fun, but it wasn’t helping my career.”

Coming from Brown’s band—where he had to memorize the set list in order and recite it while he was timed by Brown with a stopwatch—and jumping into Clinton’s universe was an eye-opener. Where he once had to make sure his ties matched all the other players and have his patent leather shoes inspected, he now stood on a stage with a guy in a diaper.

“You could go up to George and say, ‘You know what man? I’m into Western costumes. I’m really crazy about Bat Masterson and wild west shows.’ George would go, ‘Man, please, if that’s what you want to wear, cool.’ In all those years I served with James Brown, coming from that into this kind of concept? It’s like, ‘Whoaaaa!’ Now, when it got everything crankin’ musically, it got good and funky just like James Brown’s band, but the decorum, the things they say, it was different, like night and day.”

More recently, Parker joined another funk taskmaster, Prince, playing on his last three albums, beginning with the Purple One’s pop comeback, Musicology. But how that experience compares to his times with Brown and Clinton will have to remain a mystery for now. “I will always love Prince and I’ve always loved the fact that he feels that I can bring something to the table. I’m really thrilled that I worked with him in whatever capacity. That’s all I can say about him.”

After a string of successful solo albums over the past 20 years, Parker’s Roots & Grooves pays tribute to one of his earliest influences. Fronting the WDR Big Band, he brings his sax out front to cover the songs of Ray Charles.

“When I was very young, I used to listen to Ray sing those ballads and I just got the feeling that somehow he really lived through whatever experience they were about,” Parker says. “That’s soulful. He’s singing from the heart. ‘Man, if I could play saxophone like that, and people could get that same feeling… if I could get a tone or sound like Ray Charles when he sings, then somebody’s got to like and enjoy what I’m playing.’ I must have been 14 years old, trying to come up with that kind of concept about Ray Charles and playing saxophone.”

But if you find it difficult to imagine a big band sounding funky, Maceo Parker lets you know straight away that nothing will stop the funk.

“It wasn’t a challenge—hell, child, you just play! It’s the same thing. It ain’t no different. Same groove. Just do it!” 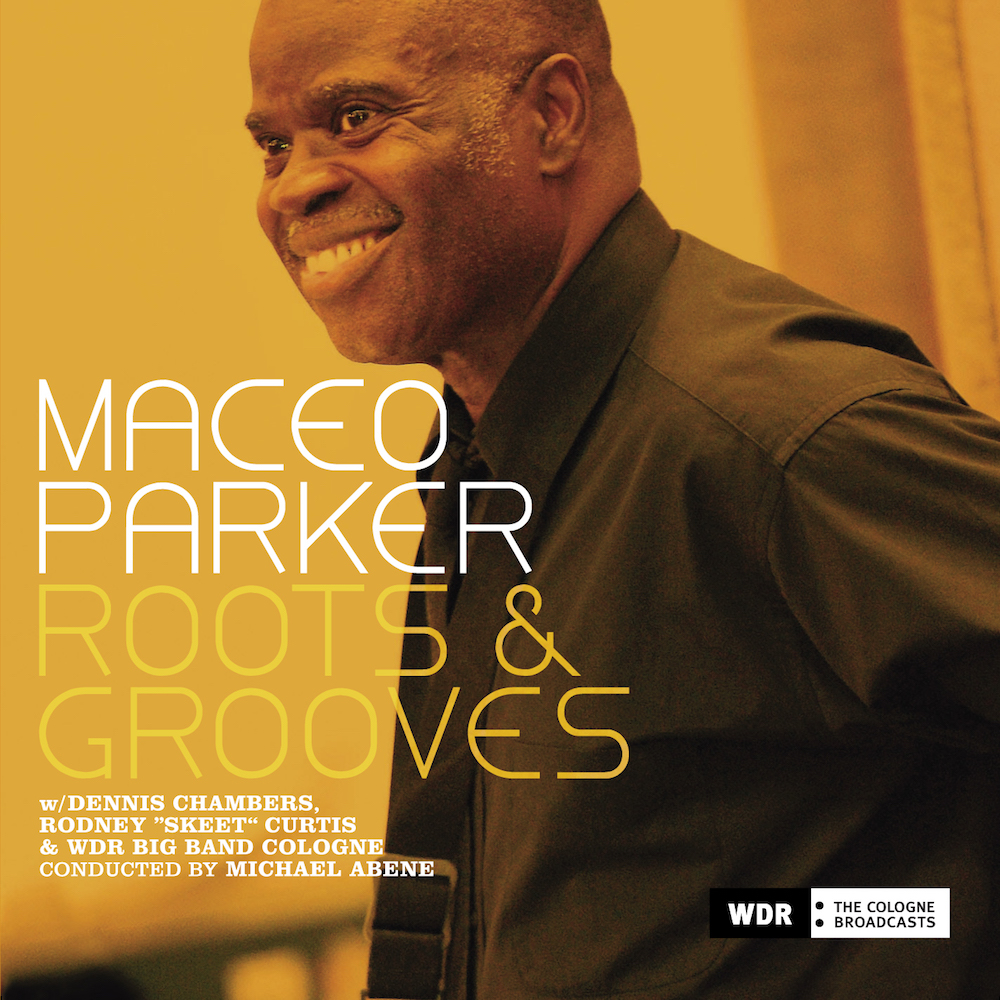