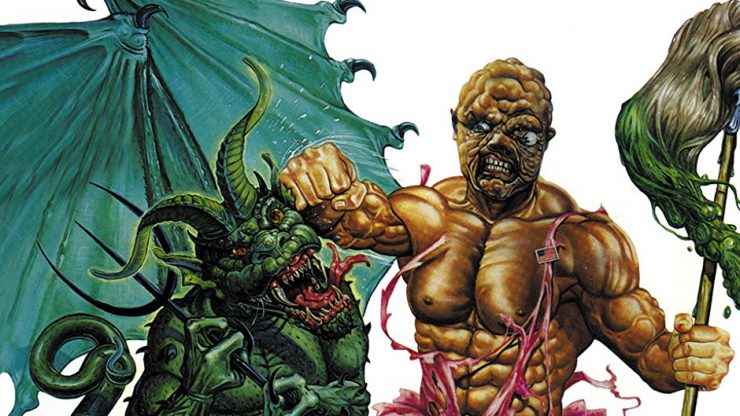 Lloyd Kaufman doesn’t just make movies—he makes Troma movies. That’s an important distinction, since no other writer/director/producer has created a body of work quite like Kaufman’s since he started Troma Entertainment 40 years ago with partner Michael Herz. Starting with the classic tools of exploitation filmmaking—sex and violence—Kaufman morphed them into his own particular style of horror-sex-satire. With titles like The Toxic Avenger, Class of Nuke ‘Em High, Fortress of Amerikkka, and Sgt. Kabukiman, N.Y.P.D., he has entered the annals of B-movie history, joining such cinematic visionaries as Roger Corman and David F. Friedman. But Troma is not yet a relic—in fact, it’s still pumping out product, such as its latest epic Return to Return to Nuke ‘Em High aka Vol. 2; the company has even extended its brand into live shows with 2008’s Toxic Avenger: the Musical (revived in London in 2017).

I was introduced to film at Yale University by my roommate, Michael Herz. I was given the Cahiers du Cinema, which was the publication of La Cinematheque Francaise, with articles by Truffaut and Chabrol, who were film critics at the time. And they were espousing the auteur theory of filmmaking, which was that the filmmaker, the director, must be the author of the film—must have total control. So being that I’m a horrible, horrible person to work with, I knew that it wasn’t going to work for me in Hollywood with a big studio, so I opted to raise my own damn money, make my own damn low-budget movies, and have my own damn control over everything. It just happens that due to a trip to Africa, where I saw a lot of boobies flashing around, and due to the fact that I rather enjoy pissing people off, the sex and violence and gore and controversial nature of Troma is inherent in my body and my soul.

What was your very first film like, 1969’s The Girl Who Returned?

The Girl Who Returned was a feature-length movie, black and white, 16 mm, and made with a wind-up Bolex, so you couldn’t shoot sync sound. It was basically like shooting a silent picture—we just had to concentrate on the image because the Bolex does not accept direct sound. So what was great about it was that it taught me how to just be visual, because we would then add narration, music, and sound effects [later]. That’s all we could do; we couldn’t mix it because we didn’t have any mixing facilities, and Yale didn’t have any film department in those days. The Girl Who Returned is extremely Warholian. You can read about The Girl Who Returned in my first book, Everything I Needed to Know about Filmmaking I Learned from the Toxic Avenger—which was written by James Gunn and me. And James Gunn, of course, went on to write Tromeo and Juliet as well as Scooby Doo and Dawn of the Dead. [Note: Gunn later went on to direct a film called Guardians of the Galaxy.]

How did you get your company Troma get off the ground?

After I graduated, I took a few jobs in the film business—I worked on Joe, that John Avildsen directed; Cry Uncle, we helped produce that movie. I started raising a little money for some other movies. Michael Herz and I went to our friends and family and raised money to make our own damn movie. The first movie that we made that was actually successful was Squeeze Play, a 35 mm raunchy comedy that was ahead of its time—it came out a little before Animal House, and anticipated movies like Porky’s. It was sexy but funny, and up until then sex films were considered the providence of the raincoat crowd. Sex films were there to sell raincoats, not make people laugh. So we broke the mold. And that may be good advice for people who make movies—whatever the conventional wisdom says, do the opposite.

How did you come up with your breakthrough hit in 1985, The Toxic Avenger?

Toxic Avenger was created because we had made a series of raunchy comedies like Waitress!, Stuck on You!, The First Turn-On!!, and the major studios started to make the same movies. But they were being very unfair: They were doing the kind of movies we were making, except they were using good scripts and good actors. So we had to find something else to do. We saw that Variety or Hollywood Reporter had a headline about how horror films were dead commercially, they were no longer viable. And then when we saw that, well, “That’s our [Springtime for] Hitler! We’ll make a horror film!” Except that we like comedies, so we wanted to do a horror-comedy. And I’m a big Charlie Chaplin fan, so Toxie is kind of like Chaplin: Instead of a cane, he’s got a mop; and his significant other is blind, like from City Lights. Preston Sturges is a big hero of mine, so this whole ensemble of mugs and character actors and Tromaville is like a Preston Sturges little town.

How is Troma different from all the other film studios?

When he was in a press conference in Japan, Roger Corman said that he thinks Troma’s contribution is that we have mixed all the genres together whereas he has made mainstream genre movies—classic science fiction, horror. We’ve taken movies like Terror Firmer and Tromeo and Juliet and inserted comedy, cops, sex, violence—everything’s in that one film. Troma is a brand. If you go to a video store, you cannot put Troma in the science fiction because it’s not just science fiction. Troma has to be by itself, on its own.

What are the elements that make for a great Troma movie?

I’m not the only director at Troma. But I write, direct, and produce, and the movies that I make have a certain quality. I can’t tell you exactly what, but they usually start in the newspapers—they start with some kind of issue that’s in our society that gets stuck in my craw. Like with Toxic Avenger, I was concerned about the toxic waste dumps all over the world. With Class of Nuke ‘Em High, there was a nuclear power plant being built right next door to New York City, and they were using crappy cement just out of greed.

My basic theory—and every movie has it; my partner keeps telling me I’m making the same movie over and over again—is that there’s a little town of Tromaville, and the little people of Tromaville are perfectly able to run their lives. Unfortunately, there is a conspiracy of the labor elite, the bureaucratic elite, and the corporate elite. They suck dry the little people of Tromaville of their economic and spiritual capital. Sometimes the Tromavillians need the Toxic Avenger to save them, or maybe it’s gonna be Sgt. Kabukiman, N.Y.P.D. who will save them. Sometimes, as in Troma’s War, the people of Tromaville must save themselves. But basically, that’s the theme that runs through the 30 years of Troma. In other words, I’m a manic depressive paranoid loser.

Do you get lots of would-be filmmakers trying to pitch you?

Yes, I get a woody very often. Oh! Would-be! Sorry. Yes, Troma has emerged as a bit of an art movement because we not only make movies, but I’ve written a couple of books—Make Your Own Damn Movie! and Everything I Learned About Filmmaking I Learned From the Toxic Avenger—and we run a film festival called Tromadance Film Festival, which takes place in Park City, Utah at the same time and place as the so-called Sundance Film Festival. But our festival does embrace independent cinema; people who enter their movies in the Tromadance Film Festival don’t have to pay to enter their movies. And it’s not fixed like other film festivals which shall remain nameless, except that it rhymes with “Fun Fance.” The tickets are free, everything is free. We’re on our sixth year. It was originally Trey Parker’s idea to do it—he did it the first year with Cannibal! the Musical, his own film, and then slowly it evolved six years later into this real film festival. A lot of young filmmakers have been involved in that.

We also have decreed the Dogpile 95 doctrine of digital filmmaking, which was an answer to Lars von Trier’s Dogme 95. If you have made a movie according to the Dogpile rules, then we’ll publicize it on our site and you’ll also receive a free certificate, whereas Dogme charges.

What do you think of the state of so-called independent cinema?

The word “independent” has been stolen from the people. These big media conglomerates have preempted pretty much everything. They even own the language—they own the word “superhero.” If you use the word superhero, as we once did mistakenly to describe the Toxic Avenger, you get a lawyer’s letter telling you that Time Warner—sorry, AOHell-Slime-Warner—owns this word. So the word independent has been totally corrupted; what the word independent should mean is “vassal of major devil-worshipping international media conglomerate.” According to the New York Times, that’s what they seem to be saying; they suggest that Miramax is an independent company when it’s a division of Disney. So the word independent really doesn’t mean anything anymore, unfortunately. I don’t know what you would call someone who makes his or her own movies outside of the loop; I would call it independent, but according to the New York Times, New Line Cinema, which is a division of AOHell Slime-Warner, is apparently an independent company. I don’t quite get it.