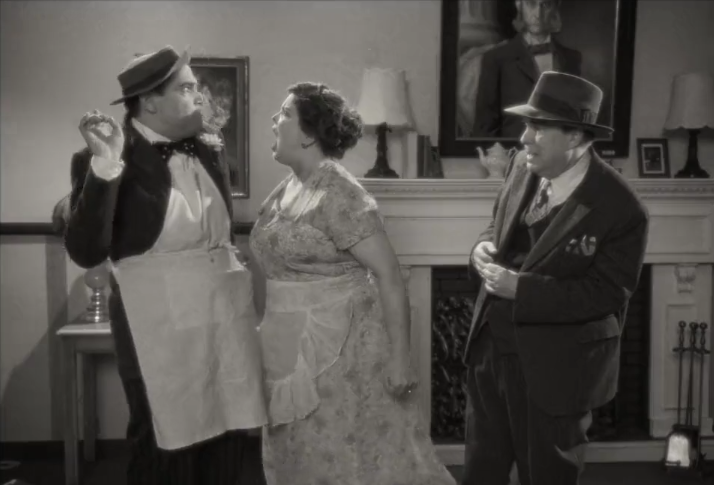 In an era when streaming media has made every piece of old celluloid new again, it may finally be time for the art of slapstick to make a comeback. For anyone who grew up watching TV on UHF channels, physical comedy still means the unholy trinity of The Three Stooges—Vaudeville comedians who beat the hell out of each other in short films starting in the 1930s. Although not as nuanced as, say, Laurel and Hardy or Looney Tunes, they nevertheless exemplified the concept of “zaniness” for many generations. Nowadays, physical comedy means movie characters getting kicked in the testicles or  Jackass-inspired idiots on YouTube hurting themselves in badly planned stunts. Surely there are still audiences out there for more carefully choreographed mayhem?

That’s what Michael Schlesinger aims to find out. After 25 years of re-releasing vintage films at MGM, Paramount, and Sony, the Trailers From Hell guru and DVD commentary expert decided to make his directorial debut with The Misadventures of Biffle and Shooster—a collection of lost shorts by a 1930s comedy team that never existed. Or did they? The artifacts assembled by Schlesinger are pretty convincing: note-perfect recreations of Vaudeville-style comedy two-reelers. From the sets to the camera shots to the performances, they look and sound just like their inspirations from the age of classic slapstick.

Why would anyone create such antique madness?

How did you first come across the stars of Biffle and Shooster, Nick Santa Maria and Will Ryan?

I’ve known Will for many, many years, Nick maybe 10 or so. As I recall, I saw them perform as B&S one night and enjoyed it, but I didn’t see it as franchise material or anything at the time.

What made you think, “I must make some movies with these guys!”?

Believe it or not, it started with a joke. One day, Nick posted a picture on Facebook of the two of them grinning from inside an empty picture frame. Being a wag, I replied, “From their classic two-reeler “It’s a Frame-Up!”, with Franklin Pangborn as the art gallery owner.” I later thought, “Hmmm, why not?” I was having difficulty selling a script, so I figured making a short film might prove a valuable calling card. Plus I wanted to see if I could actually direct. So I e-mailed them, asked if they’d be onboard and they said, “Of course!”

What is it about 1930s-era comedy that appeals to you?

I grew up on the stuff. It’s in my DNA. Same with Will and Nick. Funny is funny. Just that simple.

Why do you think this appeal can still strike a chord with audiences today? Can slapstick make a comeback?

I don’t see why not–it was coin of the realm for a century. And the response from the screenings and reviews we’ve gotten so far indicate we’ve succeeded. There’s still slapstick of a sort today, but it’s now mostly toilet-oriented: peeing, pooping, puking, guys getting kicked in the balls, et al. But it’s not funny because the Adam Sandlers and Seth Rogens of the world simply don’t comprehend how traditional comedy works. It’s an entirely different mindset from the smug, condescending tone most modern comedians employ, where everything is detached attitude. To quote Jay Leno, “Where’s the joke? I can’t find the joke!”

How did you go about raising the funds for the production?

Frame-Up was shot in three full days and two half-days in December of 2012. The other four were done in July of 2014, and were shot in three or four days each. There were two-day breaks between each one while the sets were redressed and relit. The Vitaphone short was done right after lunch during “Schmo Boat”; it took about half-an-hour. A couple of the bonus bits, such as the “Mad World” outtake, were shot later on.

Was it difficult to find actors who could perform as if they were from the 1930s?

I have plenty of actor friends, so I wrote the roles for them. A couple proved unavailable, but I had back-ups. The only actor I did not already know was Todd Rhys-Roosevelt, who stepped in when the original actor dropped out and asked Todd to replace him. Most of them knew the ’30s style of acting quite well—many of them are from Larry Blamire’s stock company—and those who didn’t quickly picked it up. What made it easier was that they were essentially playing the actors who would have had those roles back then, so they could familiarize themselves via video if they didn’t already know who they were. A more typical example: I asked Glenn Taranto if he’d like to play Vernon Dent. He said he’d love to. I told him, “Great! Grow a mustache.” And that was pretty much all the direction I gave him. He showed up the first day and he WAS Vernon Dent. He’d seen him in enough Stooge shorts to know exactly how to play the role, and he was fabulous. By the same token, our costume designers could pull up stills from that era as reference, especially when I wanted something very specific, such as Carroll Borland’s nightgown from Mark of the Vampire. (An amusing sidenote: the Bride of Finklestein script called for the bride to do the famous Bride of Frankenstein hiss, but Sara Ballantine wasn’t quite sure what that was. I pulled out my phone, found it on YouTube and showed it to her. And she then did it perfectly.)

The cadences and timing of this style of comedy are far different than how comedy is delivered today—what were some of the directions you gave your cast?

Again, little preparation was needed. We didn’t even have table reads. Any decent actor can slip into a role written specifically for them with minimal fuss. (Though Will and Nick did some preparation on their own.) We’d rehearse on the set a little bit and then begin shooting. I’d encourage them to try different ways of approaching the scene, and in some cases let them play around with the lines a little, and occasionally even outright ad-lib. In a few instances, I’d specifically earmarked places in the scripts where Nick and Will—and occasionally others—could improvise. (E.g., for “Finklestein,” the script simply says, “They do the mirror routine.” Nick and Chris Walas, as the gorilla, then did it all themselves.) We also occasionally had “Shemp takes,” where they would just keep on going after the scene was supposed to end. Most of the time, I got what I needed in about six or seven takes, but often even fewer. I think the most we ever had to do was 13, and much of the time in those cases it’s because someone blew a line big-time and everyone broke up. The blooper reel on the DVD is almost an hour!

What were some of the more challenging technical aspects of replicating the look and feel of 1930s comedy shorts?

Honestly, not that many. It can be done without exerting yourself—you just have to want to do it. Plus it’s astounding what you can do with computers these days. I was blessed to have a great D.P., Doug Knapp, who’s been around for over 40 years and knows how to light a set for black-and-white. We also had a terrific crew who really dug what we were doing and went the extra mile; the gaffer even did lightning strikes right on the stage for “Finklestein.” Much of the rest is due to my genius editor, Bill Bryn Russell, who’s a one-man post-production house. He did an absolutely spectacular job of replicating the look and sound of 80-year-old film, right down to a little schmutz on the image here and there. I get a real kick out of playing around with color, aspect ratios, film aging, etc., and we had plenty of opportunities to do so. For example, on the Vitaphone short, the picture and sound are particularly ragged, plus I asked Bill to put in a slug. Not only did he do so, but he added a fake bad-splice jump to it. With the 1962 interview, we faded the color to that familiar shade of magenta all film collectors know and detest. And for “Imitation of Wife,” we did a Handschiegl stencil effect. It not only gets a big laugh but a surprised gasp, because no one expects a sudden burst of color in a B&W film. And here’s a little secret: the room tone for all of the shorts was taken from the mirror sequence of Duck Soup!

How close do you think you came to what you imagined?

Oh, I’m thrilled to pieces. I was so fortunate to have such monster talents on both sides of the camera. They brought far more to it than I ever could have envisioned. Many of them are sadly on the wrong side of 50 and don’t get much employment these days, so I was delighted to be the beneficiary of their decades of wisdom and experience. My attitude is, I want a crew that knows more than I do about their respective jobs, and if I’m about to screw up, I want them to tell me I’m screwing up and how to fix it.

Is it possible there are other Biffle and Shooster shorts yet to be discovered?

Very possible. I’ve written titles, loglines and assorted jokes for about 25 more, and Jesse Levy, who played the hunchback in “Finklestein,” has written three scripts on his own. We’ve also kicked around ideas for a feature, but that’s barely in the embryonic stage, as well as re-creating one of their radio shows via a podcast. And we have several hours of professionally-recorded live appearances which we could edit down for a separate DVD. So yeah, there may well be more, especially if we could get Netflix or Amazon or Hulu to take it on as a streaming series. But it’ll definitely have to be somebody else’s dough, because I’ve spent all my mad money!