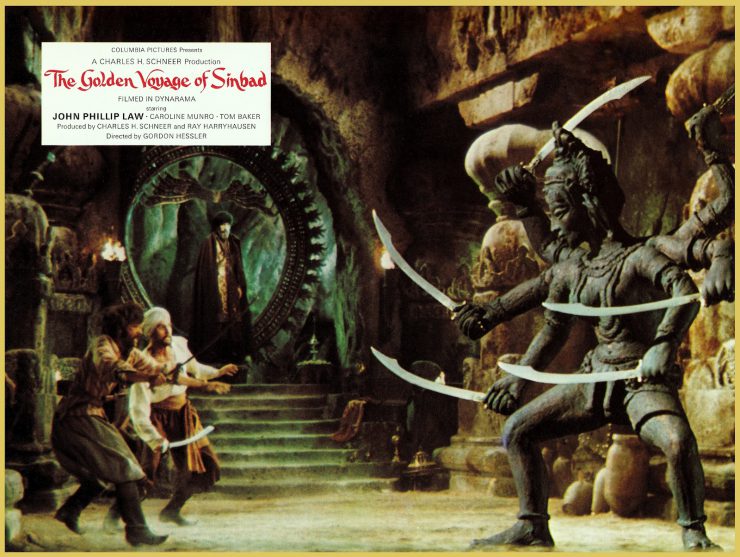 When it comes to giant creatures wreaking havoc across the Earth, one name stands apart: Ray Harryhausen (1920-2013). The special effects pioneer picked up where Willis O’Brien left off with King Kong, taking stop-motion animation to new levels with his effects work in such films as 20 Million Miles to Earth, Jason and the Argonauts, and his final feature, Clash of the Titans. His work directly influenced megabuck filmmakers like George Lucas and Steven Spielberg, leading to the modern cinema spectacle that still dominates the industry. In late 2017, some of Harryhausen’s prime films were collected in attractive Blu-ray box sets by Indicator: Wonderful Worlds of Ray Harryhausen (volumes 1 and 2) and The Sinbad Trilogy. Touting “stunning restorations” from original camera negatives, the sets have earned mostly positive reviews. (There are also single-disc editions of some Harryhausen classics, like Golden Voyage of Sinbad, though they’re now hitting “collectible”-level prices.) But if you want to see Harryhausen’s earliest creations, you’ll need to acquire either the (regrettably out of print) Ray Harryhausen: The Early Years Collection. , or the single-disc Ray Harryhausen’s Fairy Tails. Unlike the alien monsters and mythological beasts that he later became synonymous with, these Mother Goose shorts, commercials, and experiments are more child-like and ethereal, shot in vivid Kodachrome—all stored in his mother’s garage for decades until Harryhausen dug them out. For any student of stop-motion animation, this is the set that shows Harryhausen’s evolution as a cinema artist.

How did you first get interested in stop-motion animation?

Well, the whole thing started in 1933 when I saw a film called King Kong for the first time, at Grauman’s Chinese Theater—and I haven’t been the same since. So that shows how effective a film can be. It changed my life.

What was it about King Kong that captivated you?

There was something that struck me. You know, lot of people look upon it as just another horror picture, but it’s more than that—it’s one of the great fantasy films of all time. Nothing like it had ever been done before. The Lost World was silent and King Kong, of course, had this great Max Steiner score which boosted it above the average type of film. It was almost like an opera; he did the leitmotifs you have in an opera, and he followed the action and he made the image on the screen bigger than life—which to me is the essence of what film music is all about. He was one of the first ones to do it. In later years, in our films, we always insisted that we have top-rate composers because music is so important in fantasy films. [Many of Harryhausen’s films were scored by the great Bernard Hermann, composer of such landmark soundtracks as Vertigo and Psycho.]

Ray Harryhausen: The Early Years Collection gathers your work from the period before you got feature film work. How are these pieces different from your trademark monsters?

I always call this my “Dr. Jeckyll period,” before I became Mr. Hyde. I started the Fairy Tales right after I got out of the Army. My original job before the war was with George Pal’s Puppetoons. I did two years with him—I animated most of the first 12 short-subject pictures that he did. Then the war came along and I went into the special services division, and when I got out I didn’t want to go back to that [Puppetoons]. I admired O’Brien’s technique where he had a single figure, so I started some Fairy Tales. I thought the schools would need them, and I made a lot of experiments. I had this thousand feet of outdated Kodachrome—it was only about two months outdated, and the Navy threw it on the junk pile, so I retrieved it and wondered what to do with it. So I made the Mother Goose stories: “Little Miss Muffet,” “Humpty Dumpty,” “Old Mother Hubbard.” And they’re all on this DVD.

So how did you go from scavenging film stock to getting studio work on full-length features?

It took a long period—it wasn’t just overnight, you know. I made some Fairy Tales, people saw my work, and word got around. Not many people were experimenting with that type of thing [stop-motion animation]. Very little was known; there were no books on animation, and stop-motion was relatively new. So I got the opportunity to do a commercial for Lakewood Homes, which is on the DVD. I did three—I think they last 2-3 minutes. They didn’t have color then, but on the DVD it’s in color—they were shot in color but projected in black and white. That was way back when you could buy a three-bedroom house for $59.50 a month.

Where were these early works stored?

I had a lot of storage space in my mother’s garage, and when she passed away we rented the house but we kept a little section to store my things in the garage. My producer, Arnold Kunert, and I went to the garage and we found these old commercials, so they’re on the DVD as well. I had forgotten I’d made them. We went one Sunday afternoon and found all these goodies almost rusting away. They were almost forgotten. I guess it’d been 50 years [since they’d been stored], and not in very good conditions.

What are some of your favorite pieces on the DVD?

I think the Fairy Tales stand out. I call them my teething rings. I learned more about a beginning, a middle, and an end—about storytelling—by actually making the six Fairy Tales. The sixth one, “The Tortoise and the Hare,” was started in 1952. I got offered a feature film, I think it was It Came From Beneath the Sea, and I abandoned doing the Fairy Tales. So I had four minutes of animation that I stored away, along with the puppets. And then years later, in the year 2000, two young men had seen a clip of it on a Richard Schickel program [The Harryhausen Chronicles, 1998]—I had loaned him a 1-minute segment—and they said “We’d like to finish the picture for you.” So I redesigned the sets, and I couldn’t find the script so I had to rewrite it. So by telephone—and occasionally I’d dropped by in Burbank—over a two-year period they finished the film. And that’s on the DVD, too.

I told them very strictly that we wanted to keep it in that phase of the ’50s. They’re innocent fairy tales—I had to manipulate the stories around so they wouldn’t be offensive. Like in “Little Red Riding Hood,” the wolf in the original story eats grandma and Red Riding Hood, and then the woodsman cuts his stomach open and out they step—pow! Well, you couldn’t show that to schools, so I had to rewrite these stories—not that I thought I was a better writer, but we had to use taste in those days because there was a lot of censorship.

Did you find yourself more drawn to animating monsters than fairy tale figures?

I’d always been interested in science fiction because I was infatuated with dinosaurs, as most young fellows were in the early days. I met my friend Ray Bradbury in the Science Fiction League while I was still in high school, and we had a mutual interest in dinosaurs. He was going to write the great dinosaur epic and I was going to animate it, but we never got around to working together—only on one film, The Beast From 20,000 Fathoms.

You later worked with the animator of King Kong, Willis O’Brien. What was that like?

He was my mentor along with Merian Cooper, who produced it. Many years later, I had the privilege of working with him on Mighty Joe Young. It was the highlight of my life. Mighty Joe was a different type of picture than Kong—he was a nice, goody-goody gorilla rather than a violent one like Kong—but it was still a great pleasure. I had two years and a half with O’Brien and Cooper on the film. It was fascinating to see how they put a picture together in the early stages.

What particular talents are required to be a stop-motion animator?

It’s not everybody’s cup of tea. You have to have patience, and that’s something I think one has to learn. I used to be a very impatient person, and I think my training at Pal’s for two years before the war helped me develop patience. That’s very important. Otherwise, you have to have an interest in everything. I’ve always been fascinated by the gothic tales and science fiction. But I’ve seldom gone into the future—I prefer to go into the past [with his films]. The past has a romanticism that the future doesn’t seem to hold; everything I’ve seen of the future makes me think we’re in for some pretty grim happenings. They’re either blowing each other out of the universe with rocket ships or there are disasters—you seldom see one with a happy ending.

How is stop-motion animation different from other special effects techniques?

It’s very different. CGI, of course, is the latest rage. I think it’s a wonderful tool, and it does remarkable things. But there’s something that happens in stop-motion, and I learned that from King Kong. Stop-motion gives that dream quality that you don’t get if you make fantasy too real—it brings it down to the mundane. In a 30-second commercial, you see the most amazing sights—so the amazing image isn’t so particularly amazing anymore because it’s so overused.