As obedient media consumers, we have been trained to accept a flawless depiction of beauty as the standard of the fashion industry. Even the most “rebellious” model or couture is polished to a high sheen. It is an illusion that most followers of fashion are willing to believe, especially if we suspect that reality might be disappointing.

The pinnacle of this shared fantasy is New York Fashion Week, where the industry’s super-egos gather for a week’s worth of triumphant attention-seeking. But for photographer Andrew Gresham, the runways of Fashion Week are only a temporary facade—the real stories take place backstage.

Gresham shot Fashion Week shows for seven years (beginning in 2007), ostensibly on assignment for a now-defunct photo service called Fashion Wire Daily. While that job entailed shooting runways and celebrities at nearly 30 shows per season, he was much more attracted to the chaotic scenes found in dressing areas where the models are prepped before being thrust out for public display. Soon, he began shooting more and more photos that none of the wire service’s customers would necessarily be interested in buying—scenes of little elegance, but lots of sweat and struggle. His personal portfolio of Fashion Week photography became much more about documentary than glamour. (You can see his behind-the-scenes shots at agreshamphoto.com, and follow him on Instagram. )

Gresham’s rather unfashionable photos display a knack for realizing the critical moment—a woman’s upraised eyes peering over a book, an attendant’s gaze of affection (or is it envy?) toward a prepped model, a floor director’s urgently outstretched arm. And he finds details that intrigue: a disembodied hand amid the clutter of a makeup table, or a pair of shoes revealing messily painted toenails. And, yes, there are famous faces here as well—shot inches from the lens, rendering them more personal than haughty. His candid portraits reveal imperfections and emotions that make these models more human than “iconic,” capturing a reality that is hardly disappointing.

Here is a gallery of just some of his portraits (be sure to click to enlarge!):

What were your first impressions of Fashion Week?

The first time I shot it, I was like, “Wow, man, this is going to be awesome! I get to see all these famous people from magazines.” And it was cool, but the more I went, the more used to it I became—you see what it really is. It’s fascinating and grotesque at the same time. It’s like this whole other world. The photo opportunities are endless. It’s almost like a concentrated version of our consumer-driven culture—everybody shows up in these crazy-expensive clothes, everybody is so important, everybody is trying to look good. But the importance of it is wafer-thin. Fashion could go away, and the world would keep on just fine.

It’s chaos. It’s very superficial but at the same time everybody is working hard—there’s nothing glamorous about it. A model will come in from a previous show, her hair will all be one color, and then they’ll have 30 minutes to get ready for this show, so there’s 10 people standing over her, ripping stuff out of her hair. It’s pretty crazy. The fashion designers always seemed like the calm ones, just laid back and standing around.

How did you manage to get right into models’ faces to shoot their portraits?

Because nobody cares. That’s another thing that’s fascinating—people want their picture made. The models are just so used to it.  There are so many people taking pictures, you can get away with sticking a camera in their face.

Why black and white photos?

I just think it takes away a lot of the clutter of the color and focuses you more on the subject. That’s why good color photography is so hard. I’ve always just liked black and white.

Why did you take a decidedly unglamorous approach to shooting Fashion Week?

Ninety-nine percent of the people there try to record the polished side of Fashion Week, the beauty with all the makeup, the beautiful clothes etc. I think my approach, especially after the first few times shooting it, was to show the other side: the between moments, the moments leading up to what is presented, the creation of ‘the model,’ and, really, the banality of it all. We tend to romanticize industries that put on a good front, but the truth is it is still an industry and a lot of it is hard work, unglamorous, tedious, everyday living. I would look for those moments when other people were off photographing the more obvious ones. 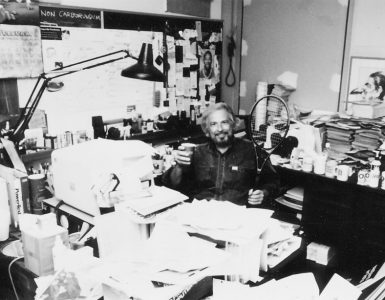