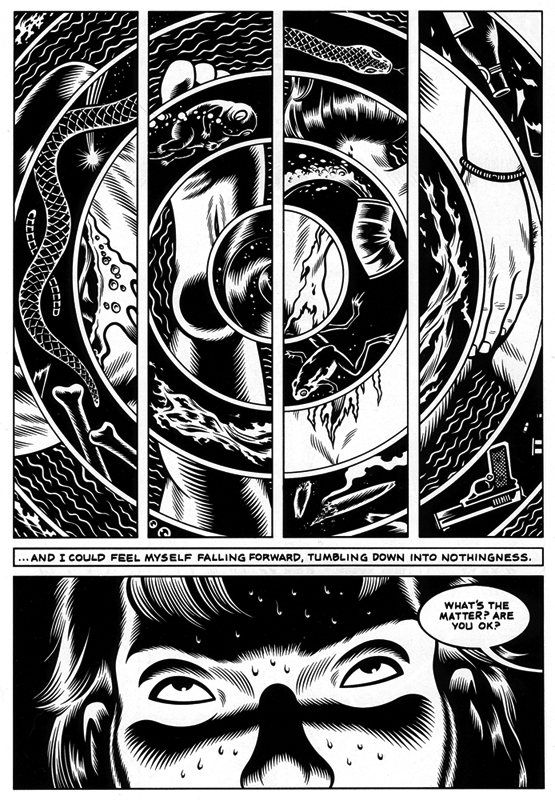 Charles Burns is obsessed with slits. In Black Hole, his multi-award-winning graphic novel now in paperback, they appear on page after meticulously drawn page, from the split bellies of biology-class frogs to the neck of a teenage boy. You might expect them to symbolize the ultimate horror: seeing what’s really beneath someone’s skin. But these slits sometimes reveal something else entirely, as in the case of the unfortunate young man: teeth.

It’s that kind of queasy imagery that made Burns’ reputation as an alternative-comics star, beginning with his strips for RAW magazine in the ’80s. His crisp, precise line work echoes the realistic style of ’50s E.C. Comics artists from titles like Tales From the Crypt; but the freak-show denizens in his stories are the heroes rather than the monsters. Burns challenges himself as much as the reader: Can he make you sympathize with el Borbah, the muscle-bound wrestler/detective with a much-too-small head? Or with Dog Boy, whose All-American features only sometimes disguise the fact that he has the transplanted heart of a dog? And then there’s Big Baby…

Black Hole is Burns’ finest work, and it comes as no surprise: It was first published in a 12-volume comic book from Kitchen Sink and Fantagraphics that took Burns 10 years to complete. While every bit as surreal and unnerving as his other comics, Black Hole also sustains an emotional thread that makes its horrors that much more horrible. Set in early 1970s Seattle (which is exactly where and when Burns grew up), it delves into the emotional and biological pains of adolescence, following a group of bored teenagers experimenting with drugs, alcohol, and sex. But some of them have become infected with what they matter-of-factly call “the bug,” a sexually transmitted disease that deforms their bodies in different ways: grotesque faces, decaying flesh, a second mouth in the neck that speaks its own thoughts. Those carrying the plague drop away from society, living in nearby woods rather than suffer the savage cruelty of their former friends.

Burns captures the timeless fears of high school students in graphic detail: bodies changing in ways that are beyond control, social strictures that can’t be challenged, and banishment for anyone who doesn’t fit in. Although some of Burns’ other comics suffer from a sense of remote coolness, in Black Hole he creates characters that are easily recognizable and relatable. And then he plunges them into very literal horrors of impending adulthood. His artwork is often astonishing, from the brooding noir feel of the so-called normal world of its characters to the eerie imagery of their worst nightmares and drug trips. His framing and composition give the story a forward motion that dares you to pause to admire the drawings. Black Hole is truly a landmark in the still-considered-fringy art form of graphic novels.

While you can still purchase the 2008 paperback version of Black Hole for the bargain price of $13.56 on Amazon, Fantagraphics has recently issued a lavish hardback Studio Edition. Its focus is entirely on Burns’ black and white artwork, presenting full-page scans at 14.5 by 19.5 inches. No doubt, this is the one to buy if you want to immerse yourself into Burn’s visionary work—but at $150, you may have to consider the fact that it’s not the edition to completely immerse yourself in the story. While it includes several complete chapters in its 160 pages, it’s not a full reprint of the original graphic novel (the paperback is 368 pages at 6.6 by 9.3 inches). But if you truly love Burns’ artwork, his every stroke is revealed.