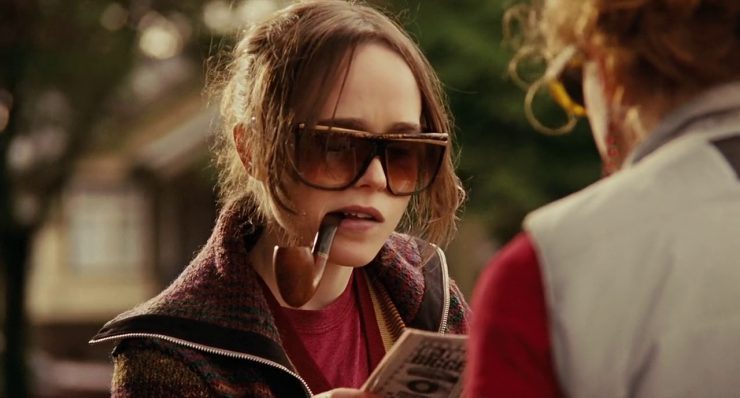 The first clue that you may in fact be watching a quirky indie comedy arrives when Rainn Wilson appears in the opening scene as a convenience store clerk.

Second clue: As the main character, a 16-year-old girl, ponders her immediate future while holding a positive pregnancy test, he says: “That ain’t no Etch-a-Sketch. This is one doodle that can’t be un-did, homeskillet!”

Cha-ching! Yes, Juno is undeniably and unabashedly one of those kinds of movies, where every character is a Character and every line of dialogue comes with its own set of quotation marks. Do even the wittiest of clerks ever have the mental fortitude to say things like, “You better pay for that pee-stick when you’re done with it. Don’t think it’s yours just because you marked it with your urine!” Perhaps if she’s an aspiring screenwriter, because only screenwriters think that mortal humans converse this way: quirkily.

But despite the hollow clunk of its first scene—and the Wes Andersonian notes throughout—Juno manages to overcome its genre’s clichés to become a genuinely touching comedy about teen pregnancy. And the reason why is very clear: Ellen Page makes you believe that a teenager can have the mouth of a jaded 40-year-old.

Her character, Juno, is the sort of girl who wraps herself in such a thick shield of sarcasm that she’s barely phased by her predicament: impregnated by her best friend Paulie Bleeker (Michael Cera) after a what-the-heck incident of intercourse. Perturbed, yes, but not quite as terrified as you might expect a young woman to be in such a situation. Instead, she uses this opportunity to crack wise about it.

Apologizing to her parents: “And if it is any consolation, I have heartburn that is radiating in my knee caps.”

Advising a potential adopter of her unborn baby: “You should’ve gone to China, you know, ’cause I hear they give away babies like free iPods. You know, they pretty much just put them in those T-shirt guns and shoot them out at sporting events.”

Announcing that she has broken her water: “Thundercats are go!”

By almost any standard of human discourse, this is awfully precious dialogue. But Page musters enough humanity for her character that it’s easy to overlook her studiously written exclamations; she is at once withering and plaintive, someone covering for the fact that she’s in over her head. Marching forward belly first, Juno compensates for her suddenly-much-more difficult life by flaunting her “mistake”—she’s dealing with it, so why won’t you? In an era of increasingly insipid movie characters (especially teenagers), it’s hard not to root for one who’s smart, witty, and brave—though you may occasionally wish the script would let her take a breather from casting impeccable barbs.

With but one movie script to her credit at the time, Juno screenwriter Diablo Cody was already among our most celebrated scribes. That may have had more to do with her well-publicized background (what media outlet can resist a stripper-turned-writer story?) than her storytelling skills, but Juno quickly earned her a following not unlike Joss Whedon’s. In fact, her attempts at coining catchphrases in Juno are downright Whedonesque, though not quite as clever. “Honest to blog!” Juno’s best friend exclaims, instantaneously dating the movie for all eternity. And will the term “wizard” ever really become the new “rad”? We can only hope not. (In an interview with Vanity Fair on the film’s 10th anniversary, Cody claimed the overwritten dialogue was there to get script readers’ attention.)

Juno doesn’t encounter many potholes in her journey. Her supportive parents barely bat an eye at the news of her pregnancy. She quickly finds a young, wealthy couple (Jennifer Garner and Jason Bateman) to adopt her baby through one scan of the ads in the Penny Saver; they turn out to be not quite perfect, but this causes only momentary disarray. As her partner in ill-advised sex, Cera more or less portrays the same likable, shy boy he’s been playing since Arrested Development, only with fewer lines. He seems agreeable to whatever. Yes, everybody’s issues do get resolved, just as you expected them to.

This qualifies Juno as a feel-good movie, though the main character’s triumph doesn’t seem particularly hard-fought. Things are just a bit too neat and orderly for a movie that is being prized for its sense of reality. Nevertheless, Ellen Page creates a character you wish you knew, someone who’s always funny, always interesting, and who could use some help. It’s a bold performance that’s hard to resist, in a movie that serves mostly as a backdrop for an interesting new actress.