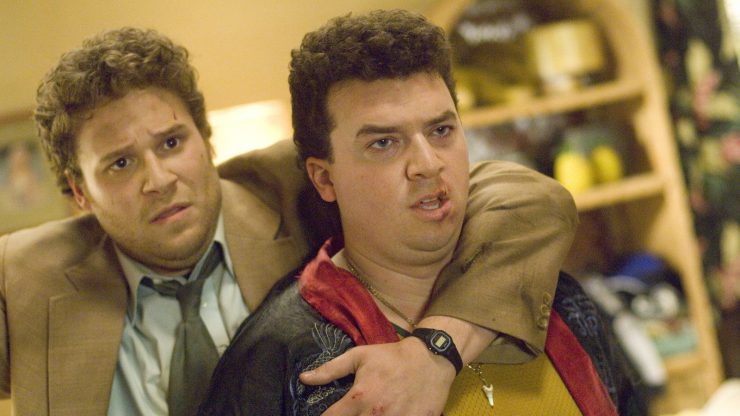 Reassessing: ‘Pineapple Express’ (2008) and the rise of the Apatowian comedy

In the golden age of R-rated comedies—roughly, roughly 1975 through 1984—there was much to gladden the hearts of 14-year-old boys: National Lampoon’s Animal House, Caddyshack, Used Cars, Stripes. Now considered classics of the form, they all delivered on their promises of zany hijinks conducted by hopelessly immature boy-men—with many appearances by gratuitously topless women. It was a great time to be alive, if you were still in middle school and could manage to sneak into the theater with your buds.

But it all started going to hell with Porky’s, which just plain sucked, and then the ultimately lame Police Academy movies. Once those unimaginative series petered out, studios decided there was no more money to be made in the exploitation of hormonal, under-age-male ticket-buyers. Thus, the nation was plunged into a dark age of PG-13 dominance, and romantic comedies starring former sitcom actors would rule our movie screens for the next 20 years—a period of unspeakable horror.

Thus, it’s been quite a relief to witness the resurgence of R-rated comedies—I’d much rather be offended by a movie for its content than its lack of content. American Pie, Old School, Wedding Crashers… they all pretty much stink, but at least it’s a pungent input compared to tasteless (in the sensory sense) non-experiences like Rumor Has It. Don’t you remember that one? Neither do I! But according to the Internet, it starred Jennifer Anniston and Mark Ruffalo, and was directed by former good director Rob Reiner. Likewise, does anyone have recollections of Just Like Heaven, Made of Honor, Music and Lyrics… Just… Married… The Holi—… zzzzzz. (Wha? Oh, sorry about that. Relentless mediocrity makes me sleepy.)

So I find it difficult to get very upset with Judd Apatow and his successful quest to make R-rated comedies interesting again. His movies don’t have much in the way of plot, or pacing, or thematic points, really. But they do have some funny moments that echo real life, and they can cause more than one genuine belly laugh in a single sitting. Pineapple Express, which he produced, continued in the Apatow tradition of The 40-Year-Old Virgin, Knocked Up, Superbad, Walk Hard, and Step Brothers. Which is to say that it’s a mixed bag of juvenile escapades perpetrated by guys who ought to be more grown-up by now—just like its ’70s predecessors (except without the nudity).

The noteworthy difference with Pineapple Express is that Apatow enlisted a Criterion Collection-approved director, David Gordon Green, to tackle a stoner comedy. How did that work out? Not bad, though it’s ultimately best viewed on cable TV between commercial breaks.

Seth Rogan has made playing a lovable schlub his life’s work, and in Pineapple Express he ratchets up his smart-yet-lazy persona to new heights of inadequacy. He plays Dale Denton, a process server with humble aspirations in life—he likes to get high and to see his girlfriend (who’s still in high school). That’s about it. After scoring some exceptionally rare weed from his foggy-headed dealer Saul (James Franco), he goes to serve a subpoena to one Ted Jones (Gary Cole)—and happens to witness Ted shooting another man in the head right in front of his picture window. (Bad planning, there.) And wouldn’t you know it: Ted just happens to be Saul’s big supplier. Although Ted doesn’t catch Dale driving off from the scene of the crime, he does snag the roach that Dale left behind—and realizes it’s his own strain of Pineapple Express. So, he sends his hitmen to trace the weed back to Dale, killing everyone else along the way.

Funny, right? Okay, it sounds more like a Scorsese murder-fest than a zany laugh riot, but the cast manages to turn it into a buddy-comedy-meets-thriller-parody, injecting character sketches in between goofy chase scenes and brutal shootings.

With his sly asides and perma-paunch, Rogan is the prototypical slacker pal you wish would do more with himself—so you may find yourself rooting for him even as he confesses his love for his grade-school girlfriend and then immediately puts the brakes on when she brings up marriage. Rogan navigates the terrain of underachievement so affably that you hope for a Hollywood ending where his character’s dreams are effortlessly achieved. (Thankfully, Pineapple Express avoids that trap.)

Meanwhile, although Franco puts in a convincing portrayal of a dim, sweet-natured pot dealer, the real discovery here is Danny McBride playing middle-man dealer Red. The North Carolina actor (star and writer of The Foot Fist Way) creates an utterly bizarre, would-be drug lord who wears bad track suits and memorializes his deceased cat. And he cannot be killed, no matter what guns or explosives are inflicted upon him. It’s a tour de force of nonsense, and McBride immerses himself completely in what turned out to be a star-making role. Although his career took off after Pineapple Express, culminating in Eastbound and Down (also often directed by Green), you can’t help but wonder what might happen if he tackled a character that could be described beyond just “massive dick.”

In the end, however, Pineapple Express becomes an over-the-top shoot ’em up, complete with graphic killings. Green attempts to throw in real thrills amid the gags, but the gruesomeness is off-putting. (Seeing one of our heroes shoot off a dead person’s foot makes it a tad difficult to empathize with him, for instance.) It highlights a common feature that marks much of Apatow’s filmography: The crying need for a strong-willed editor.

In the years since Pineapple Express, Apatow’s influence on Hollywood comedy is difficult to avoid and has expanded beyond chronicling just male immaturity to also include female behavior, from HBO’s Girls to inept imitations like Rough Night. He’s even become respectable enough to earn his own tribute by the Film Society of Lincoln Center. But, for the sake of the R-rated comedy genre, let’s hope he never becomes too respectable.