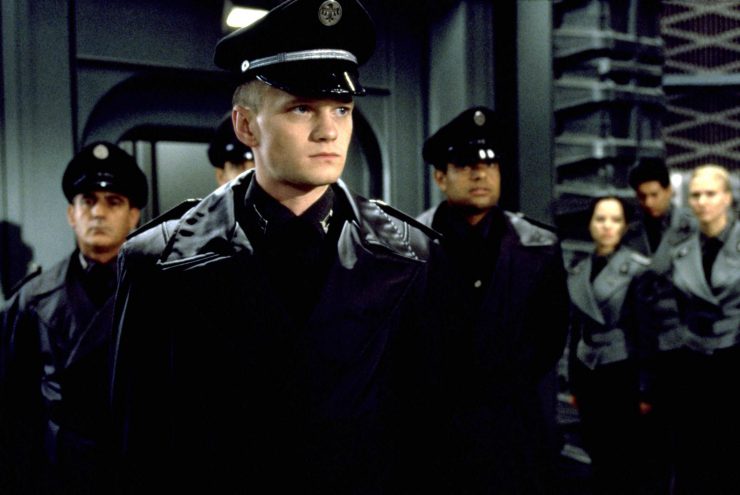 For the past five years or so, director Paul Verhoeven’s Starship Troopers has been undergoing a nonstop critical reevaluation, led by the Atlantic‘s 2013 declaration that it was “One of the Most Misunderstood Movies Ever.” As right-wing nationalists around the world tout the benefits of fascism, the film’s 20th anniversary last year was met with a series of articles celebrating its prescience, from the Guardian (“it’s reality, not sci-fi“) to the Nerdist (“7 REASONS STARSHIP TROOPERS WAS WAY AHEAD OF ITS TIME“), as well as interviews with Verhoeven remarking on his clever references to Nazi propaganda.

But here’s the thing: Its satire was always obvious. Nobody really misunderstood or missed its “message” at the time, seeing as how heavy-handed it all is, even then. (Neal Patrick Harris accentuates his Aryan good looks wearing a black SS trench coat, for fuck’s sake!) Rather, most of the criticism was aimed at its other, more dubious achievement: With Starship Troopers, Verhoeven made the first movie that’s more like a video game than actual cinema.

[History note: In the late ’90s, scores of software companies were tackling the biggest technological challenge of the age: How do you make a video game more like a movie? Everything was tried: Full-motion video of crappy actors in hideous costumes emoting stupid dialogue (didn’t work). Digitized human puppets that looked like digitized human puppets (sort of worked). Digitally animated cut-scenes of action sequences thrown in between sections of gameplay (kind of worked). Book-length pamphlets that were supposed to give the game a more “literary” feel (really didn’t work). It took another decade before video games truly became cinematic-ish.]

Sure, there were movies based on video games before (Super Mario Brothers, Mortal Kombat, etc.), but those failures tried too hard to be “real” movies, trying to transform video game characters into flesh and blood. Starship Troopers, on the other hand, dispenses with humans completely–it has all the characterization, drama, and storytelling depth of a Nintendo 64 cartridge. But it also has really good gameplay.

Loosely based on the ’50s novel by Robert A. Heinlein, Starship Troopers is ostensibly about a swarm of superbugs on another planet who’ve been spitting asteroids at Earth. This being the distant future, Earth is now controlled by a militaristic Federation armed to the teeth with intergalactic space cruisers and has been able to repel the attacks. But once an asteroid slips through Federation defenses and wipes out Buenos Aires, all-out war is declared–the bugs must be exterminated!

We follow this tale through the eyes of its genetically perfect cast of former Melrose Place stars. Casper Van Dien stars as Johnny Rico, a brash rich kid who joins the Mobile Infantry because he wants to impress his sort-of girlfriend hot shot pilot Carmen Ibanez (Denise Richards, who looks like a lost cheerleader who accidentally wandered onto the set). Meanwhile, her fellow hot-shot pilot Zander Barcalow (Patrick Muldoon) is putting the moves on her, even as Johnny’s fellow soldier trainee Dizzy Flores (Dina Meyer) is putting the moves on him. Phew. Meanwhile, there are a few dozen other recruits we have to keep track of as they go through boot camp and learn the ways of becoming a good citizen.

And that’s precisely where Starship Troopers leaves typical action-picture territory and takes some funny stabs at satire. Through the use of online propaganda reports, Verhoeven lets us in on the fact that the Federation is actually a fascist state–in order to win citizenship, you have to undergo two years of military duty (if you survive). The general populace follows Federation directives unquestioningly, doing what it’s told. Go to war with another species that may be simply defending itself from human encroachment? Yes! “The only good bug is a dead bug!” as one report declares in a World War II newsreel-style voice-over–”Know Your Enemy!” The best one barks out, “Everybody is doing their part!” and shows schoolchildren gleefully mushing bugs underfoot as a teacher proudly looks on.

Verhoeven wants it both ways: He forces us to see how ridiculous all this is even as he revels in the ridiculousness itself. Yeah, our society could descend into a fascist state if we don’t question authority–now let’s go kill those bugs! The federation rules! This weird fusion of barbed commentary and visceral action works–depending on your own tolerance for each. Myself, I was laughing at both…with the occasionally queasy realization that I was cheering on a bunch Barbie and Ken fascists.

Whether Starship Troopers works as a movie… that’s another question. With its massive use of crisp digital imagery, its physically perfect cast of bland action figures, and its fast-paced action, Starship Troopers is truly a giant video game. You never dwell on anything long enough to really feel much emotion–it’s always woosh! on to the next attack!–like a good level of Duke Nukem 3D. Even the extensive gore smacks of a first-person shooter–human bodies are chunked, stabbed, slashed, torched, and dismembered in every possible way.

However, the lapses in logical military tactics… lordy. If you’re going to attack an alien homeworld with the intent of total annihilation, which makes more sense: a) send down hundreds of thousands of ground troops to be slaughtered, or b) nuke it to charcoal? Likewise, if your space fleet was previously blown to bits by bug missiles during the first invasion, do you: a) stick your entire armada next to the bug planet, ensuring that it will be blown to bits again, or b) park the armada out of range. Hmmmm…

There are plenty of other quibbles to report (haven’t these guys ever heard of hand grenades?), but Starship Troopers still mostly delivers on its promise of sci-fi spectacle–the bugs are cool, things blow up in creative ways, the cast is attractive. But, like a video game, it’s mostly just a way to blow a couple of hours, doing something that evaporates from memory as soon as you’ve switched it off.