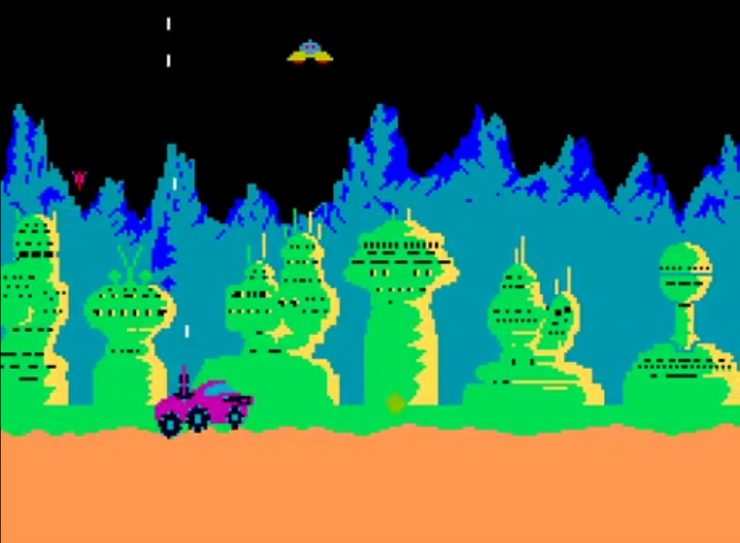 The names trigger recollections of long-ago visits to dimly lit arcades: Phoenix. Space Fury. Moon Patrol. These were games that did not inspire quite the same level of quarter-killing obsession as, say, Defender or Asteroids. They were the ones you played when you needed a palate-cleanser after a banner session of Tempest or Missile Attack—the b-team. Nevertheless, their graphics, sound design, and game mechanics are forever imprinted on the brain cells of anyone who lived through the first epoch of video games.

Although retro gaming has celebrated a lot of digital resurrections of classic titles on mobile devices today, it’s difficult to find not-so-classic games in playable form. But, thanks to the Internet Arcade (via archive.org), new generations of players can discover hundreds of worthy titles that would’ve otherwise been unplugged forever. In fact, you can not only track the history of video game design, you can play it.

The arcade is browser-based (so you’ll need one of those old-fashioned computers with a keyboard) and it utilizes the freeware MAME emulation software. Now, you’re certainly free to download MAME yourself and run it on your computer, but the catch is you’ll have to also locate and download the game ROMs—which game publishers generally frown upon. At Internet Arcade, it’s all ready and waiting for you without the illegal-download worries. The only drawback is that some of the controls are a bit wiggy, either not translating well to keyboards or still a bit buggy. (Some of the titles lack keyboard maps as well.)

Depending on how important arcade games were in your childhood, you can easily lose yourself for hours, rediscovering titles that may have been temporary obsessions and are now but distant memories. My perusals have uncovered several lost favorites that were popular when they came out but don’t get a lot of attention today:

• Williams’ Sinistar, a space shooter made terrifying by the blood-curdling voice synthesis of its disembodied boss. Once the evil space-head assembles itself and is ready to kill you, it thunders: “Beware, I live!” (Much scarier than the belligerent alien in Space Fury.)

• Taito’s Quix, an extremely inventive drawing game in which you claim screen territory while trying to avoid a floating “Quix” and sparks that travel along your path; if you hesitate while drawing, a fuse is lit. (This one lacks a keyboard map; I found the alt key works for drawing in slow mode—still trying to find the key for fast mode.) There’s also Quix II, and Super Quix, which regretfully inserts cute creatures and a jaunty soundtrack.

• Atari’s Marble Madness, a groundbreaking puzzle game by Mike Cerny in which you have to roll a marble through an obstacle course that’s inspired by M.C. Escher. It showed how physics could be the main gameplay element rather than just shooting stuff.

Some of the games don’t run well (I would really like to relive Gottlieb’s Mad Planets but can’t get it to launch), and your long-lost favorites may not be available. (Oh, Major Havoc, where are you?) But the Internet Arcade does feature some of the big classics, too, like Zaxxon, Q*bert, Stargate, and many more.

There are other titles that I have no recollection of playing, but they look and sound intriguing: Atari’s Quantum, a trackball vector game in which you try to capture globules; Centuri’s Aztarac defense game; Exidy’s Star Wars knock-off Star Fire. (If you’d rather play the real thing, the arcade also offers The Empire Strikes Back.)

And then there are the games that you’d never waste a quarter on, like the one based on Journey, the rock band. Yep, just I suspected all those years ago, it sucks.