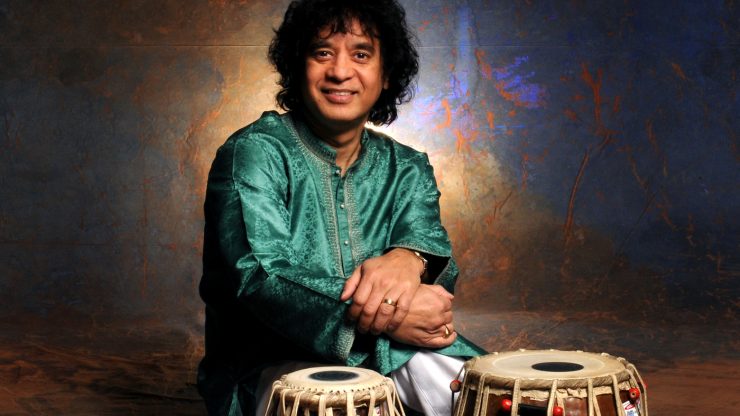 As a child of seven years, Ustad Zakir Hussain would begin his days at 2 o’clock in the morning when his father would wake him for drumming lessons while everyone else in their home slept. They would talk about drums and sing rhythms together—not play them, but recite them so Zakir would know them in his head, not just his hands. Then, once daylight arrived, he would leave for school; when he returned, he’d immediately go back to the drums for hours of practice. And he would repeat this routine again each day for some five years.

This all seemed perfectly natural to Zakir; he had been hitting his mother’s pots and pans since he was three. Playing drums was all he wanted to do. Of course, at that age, he wasn’t intimidated at all by the fact that his father, Ustad Alla Rakha, also happened to be India’s most renowned master of classical tabla. Or that his mother didn’t want her son to be wasting his time with drums, preferring him to become a doctor. All he wanted to do was show his father what he could do on the tabla.

“For me, my father was a legend, a hero, a man I wanted to emulate and impress,” says Zakir now, some 50 years later. “The one thing that I thought would do that was if I was a very good tabla player. And in doing so, somewhere along the line, I developed a special relationship with the instrument—it just became something I wanted to always be with and use as a mode of communication.”

That special relationship with the tabla has taken him through a storied career, from Bollywood scoring sessions in the ’60s to fusion experiments in the ’70s with jazz guitarist John McLaughlin and Shakti; from the emergence of “world music” in the ’80s and ’90s with Mickey Hart’s Planet Drum project to explorations with electronica in the new century with bassist/producer Bill Laswell and Tabla Beat Science. He has crossed multiple genres throughout his career, collaborating with a diverse array of Western artists such as George Harrison, YoYo Ma, Joe Henderson, Van Morrison, and many more.

But that short list of career highlights barely touches on his achievements; Zakir has taken the tabla into new realms, just as his father did before him with his legendary performances with Ravi Shankar at the ’67 Monterey Pop Festival and at Woodstock in 1969. Arriving in the U.S. at the age of 18 to teach at the University of Washington in Seattle, Zakir knew that he wanted to play with Western artists—and that would mean taking a new approach.

“That approach is something that I learned after leaving India—allowing the instrument to speak, seeing what tonal possibility it has, what harmonic possibility it has, as opposed to playing compositions. It’s like watching a Western classical pianist playing Brahms or Schubert or whomever, and then seeing a jazz pianist really getting into the instrument and trying out different things.”

The sound of the tabla often begins with a gentle thrumming, as fingertips flutter over the drums’ trio of surfaces: the kinar, at the outer edge; the sur, an inner ring; and the shiyahi or gab, the black circle near the center. Alternating between the larger, deeper bayan drum and the smaller, higher-pitched dayan drum, players increase their tempo to create a flurry of ringing tones and fluid thumps, forming complex rhythms that are simultaneously thrilling and mesmerizing. A true virtuoso, Zakir takes these classical forms into the realm of euphoric improvisation; but he’s in no hurry to show off his pyrotechnic skills—he plays with humor and emotion, expressing his self with each performance.

“Tabla actually is an instrument that lends itself well to experiments—it fits no matter what kind of music you play,” he says. “I myself have played with jazz musicians, rock musicians, African artists, Chinese, Japanese, Korean, Latin musicians, and even Western classical musicians, and it somehow seems to work. Last year I played with the Nashville Symphony Orchestra; they built a new concert hall and for the opening, they commissioned me along with Bela Fleck and Edgar Myer to write a piece of music. I’ve been glad that tabla is an instrument you can hear in a television show or in Mission Impossible or in a horror movie or anywhere.”

But one aspect of the music industry he dislikes is labeling the music itself. “Labels or titles for certain styles is something that the record companies need,” Zakir says. “As far as I am concerned, or the various musicians I’ve worked with are concerned, we never really walk into a studio and say, ‘Okay, we’re going to make a new age/electronica/jazz album.’ No. We just go out there, sit down, and play music.

“World music is a vast, vast category and to say that my music is ‘world music’ is actually belittling the idea of world as the fountainhead of a certain style of music. There’s a lot of the world’s music that is missing in my music—there’s still a lot yet to be found and learned.”