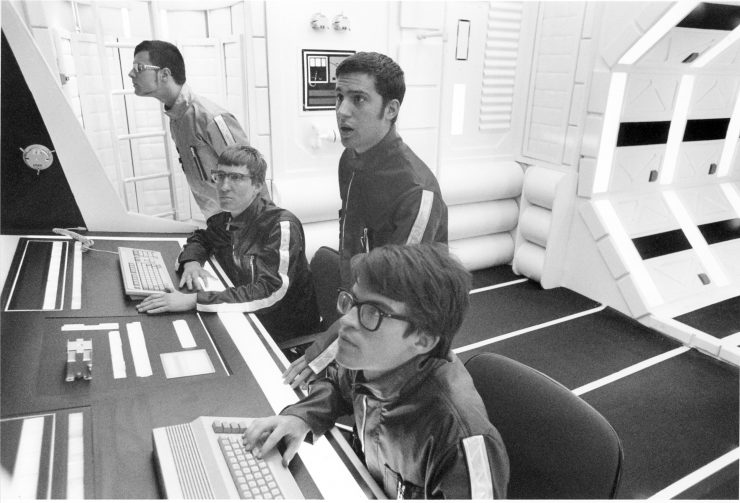 The first rock band to bring you yesterday’s technology tomorrow: Man or Astroman?

In answer to the question posed at the end of this story: Yes, the Man or Astroman? invasion continues to this day. You can receive reports of their efforts at Facebook, while also contribute to their documentation project at astroman.com.

It’s 1:10 a.m. EST, and the interstellar, transdimensional, extraterrestrial invasion force that is Man or Astroman? has just conquered a 7-11 in the Silverlake area of Los Angeles. Reenergizing themselves before their next gig at the nearby (and aptly named) Spaceland, the alien marauders have commandeered the convenience mart’s crude telecommunications device (read: the telephone) to give fair warning to the Earthlings of Earth.

“Beware of the Astroman,” declares spooky spokesalien Birdstuff, “because the earth is our laboratory, and you are our lab rats!”

Can it be true? Is all of humankind at the mercy of four nerdy-looking alien castaways who play surf guitar music and subsist entirely on Little Debbie snack cakes? Well, whether you know it or not, we have been invaded.

“Our mission, of course, is to conquer the world,” proclaims Birdstuff, who also drums for the band in his spare time. “Right now, our biggest dilemma is deciding if we’re gonna give it back or not. My vote is to destroy it. But the other guys haven’t been quite as hip to the cause.”

Whether or not the great masses of humanity can be conquered through the performance of astro surf rock remains to be seen. But if any group of alien creatures can do it, it would certainly be Man or Astroman?. The four musicians (including Blazar the Probe Handler, Trace Reading, and Coco the Electronic Monkey Wizard) have been forging their own unique brand of surf since they crash-landed in Auburn, Ala. seven and a half years ago. Taking the classic Dick Dale sonic guitar jangle of the early ’60s, Man or Astroman? has fused it with a modern punk sensibility, creating instrumental twang-rock that ejects you right out of 007’s Aston Martin and onto the grimy floor of your favorite beer hall.

But that’s not all. Man or Astroman? delivers its atonal twangs and rumbles within a pop culture framework of ’50s science fiction and futurism. The band’s shows are multimedia smorgasbords of obscure visuals, wild electronic sounds, and “dead media,” as Birdstuff describes it. Meanwhile, its records are adorned with classic science fiction artwork (such as the band’s debut LP on Estrus, Is It…Man or Astroman?, illustrated by Richard Powers’ ghostly, abstract aliens) and have snippets of dialogue from long-lost psychotronic movies wedged in between the songs.

Some would say all this is just inspired shtick, but there is an actual connection here if you look hard enough. Birdstuff sees surf music as harking back to a time when people looked forward to the future.

“People were thinking so futuristically back then,” he says. “We had all this tremendous technology from World War II, the A-bomb, and television, and it led people to think towards the future. Nowadays, people just see right ahead in front of their faces, like a dog being led around the track or a donkey being led by a carrot. It’s like there’s not anywhere to really go except what’s immediate–and back then, people were thinking about colonizing Mars.”

Sadly, most of Man or Astroman?’s imitators have lost the message (or didn’t even hear it), instead seizing upon the campy graphics and titles in an attempt to glom onto the retro spacy image. Take a look at the cover of Powerman 5000’s Tonight the Stars Revolt!—there are the pseudo sci fi movie poster graphics, the silly titles (“The Son of X-51,” “Supernova Goes Pop”), the surly band members posing ever so alien-like. But it all looks painfully fake–a poor imitation of cheeze. Likewise, the disc tries to emulate Man or Astroman?’s lost dialogue interludes with movie sound effects that lead to nothing more than mundane hard rock of the White Zombie variety. None of it really makes much sense.

Other bands, such as the Helsinki, Finland-based Laika & The Cosmonauts, have also adopted the space/surf continuum–to much better musical effect. But whereas they seem to use it for the cool name, Man or Astroman? are True Believers. Although they may have fun with the campy elements–using ephemeral films from the Space Age on-stage, insisting on never using their real (earthly) names—they manage to stride the fine line between silliness and musicality. They may be novel, but they aren’t just a novelty act; they rock. Subliminal messages aside, audiences at their live shows should expect one thing: surf-based chaos.

“We just give them the direct neural experience and let ’em splice out or decipher whatever they will—we don’t try to get too, too heavy with our Earth subjects,” explains Birdstuff, perhaps lamenting Earthlings’ inability to fully comprehend the many levels of Man or Astroman?. “Mainly, we just try to put on a cyber-kinetic punk rock show and let everybody have a good time.”

Thankfully, Man or Astroman? have also avoided the historical downfall of surf rock instrumentalists–the one that led to Jimi Hendrix’s famous vow, “You will never hear surf music again.” That is the notion that after three songs, it all starts sounding the same. In other words, surf rock can get really dull really fast. Fortunately, Man or Astroman? has been smart enough to warp this classic form–to the point of including audible human vocals on its Touch and Go LP, the computer-focused EEVIAC. In fact, the band mutates the surf form into the realms of throbbing industrial dance—alien style, as in the album’s “D:contamination.”

“We never set out to be recreationists–we were futurists from the start,” says Birdstuff. “Sometimes it gets retrospective from looking back to look ahead, but we’ve never wanted to be recreationists. We’re kind of musical mad scientists. We snip and paste whatever we want to. If we want to get really traditional and do a lot of straight surf, we’ll do that. But if we want to bring in things that sound like buzzes off the surface of some unknown planet, then we’ll do that too. We’ve never wanted to just completely regurgitate something for people that’s easily swallowable.”

Finally, as his bandmates/fellow invaders head back to the club for their next show, Birdstuff is forced to sign off. Soon, they’ll be rocketing into their own alternate reality onstage, backed by timewarping video devices. But it’ll be only a small piece of what Birdstuff wishes the world was really like.

“I think one of the most interesting things is yesterday’s futures,” he says, “what people in the late ’50s or ’60s thought the future was going to be like. It was definitely different than how it is now. But maybe in a different, strange reality–if those futures would have come about and everybody was popping around in a jet car somewhere–then maybe it’d be cooler. If things had kind of gone different, I think the world would’ve been a lot wilder…”

At least we humans who have absorbed such albums as Project Infinity (Estrus) or Made From TECHNETIUM (Touch and Go) can claim to have heard fragments of that alternate future. But you do wonder: How long can the aliens of Man or Astroman? keep up their invasion efforts? How long before four guys in silver suits seems more quaint than cool? Answer: As long as the world is mired in the present, there will always be a need for ambassadors from the future.

The (recycled) art of Man or Astroman?: