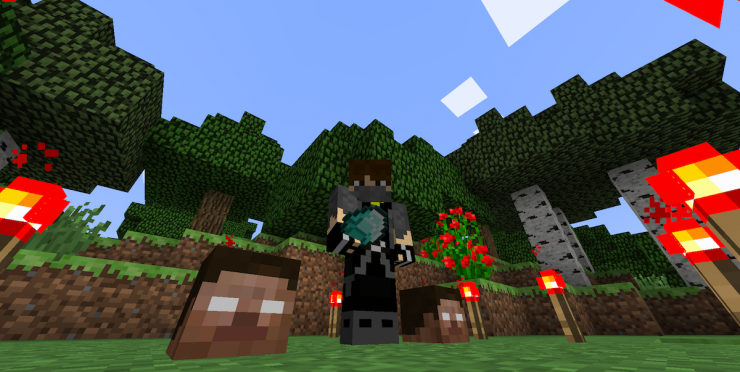 Will my kid survive the endless chasm of ‘Minecraft’?

This is going to be one of those first-person parental posts about children and video games. Only it’s not going to include the usual self-reassuring conclusion about my parenting skills—I have no idea if I’ve made the right choices, or whether my son may eventually develop into a supine slug whose only exposure to light will come from the glow of an LCD screen. But I do know this: Minecraft is a never-ending chasm.

Before Minecraft—an independent game released by Sweden’s Mojang in 2009 but now owned by Microsoft—video games in our household were a minor dalliance for my son. The Wii gathered dust, its lonely Nunchuk seeing little action. The Xbox 360 did get fired up for Mini Ninjas, but once the Evil Samurai Warlord was vanquished, it too faced general disinterest—except for a brief flash of fervid Skylanders collecting. (Their plastic avatars now lay forgotten among the ruins of their dormant portal.) More successful was the iPad and its zombie-killing vegetation and its disgruntled pig-hating fowl. And it, in turn, led to the discovery of the Minecraft Pocket Edition. That slight $6.99 beta app would open the door to a whole new world of obsession for a mind once preoccupied by green army men and samurai.

Now our leisure hours not spent outside are ruled by Minecraft and a never-ending quest for the perfect mod.

At first, Minecraft appears to be a simple building-block game set in a randomly generated terrain of jungles, mountains, caves, deserts, and oceans. You chop down trees for wood, mine ore for blocks of stone, kill a cow for leather. Then you make stuff: swords, bricks, houses. Other denizens include gentle villagers who keep to themselves, and zombies who come out at night and try to eat you. But Minecraft’s simple retro graphics disguise what’s really a complex sandbox game for amateur programmers who have expanded the PC version into all sorts of new directions. Determined players with lots of time on their hands have built and shared not only humongous worlds for others to explore on multiplayer servers, but also modifications that change the very content of the game itself. (The New York Times calls these players “The Minecraft Generation.”)

Whatever you can imagine has probably been added to the Minecraft universe by someone with similar instincts: Mayan pyramids, ICBM launchers, dinosaurs, zeppelins, tornadoes, World War II airplanes, a whole zoo’s worth of different animals (both real and mythological). Then there are the pop-culture mashups: Doctor Who, Skyrim, The Hunger Games, Adventure Time, all reset in Minecraft. Websites like planetminecraft.com and minecraftforum.net organize the offerings—and YouTube is rife with mod reviews starring fifth-graders—but the best way of finding the right mod to tickle your fancy is a keyword search: “flying zombie pigs minecraft mod.”

That’s what I often find myself doing in the post-dinner/pre-bedtime hours: directed by my merciless progeny to find more mods. He delights in constructing buildings of his own design in the game’s creative mode, and then populating them with odd creatures developed by modders. Therefore, he must have ever-newer additions to the game: “Blue Knights vs. Red Knights With Shields—That You Can Spawn From Eggs And Will Fight Each Other. Search for it! Just type it in, please!” he demands. And lo and behold, there they are, ready to be installed.

On one hand, I am pleased my son is not demanding to play the latest shooter involving elite military squads on suicide missions behind enemy lines. The combat in Minecraft consists mostly of rudimentary thwacking. On the other hand, he is getting a little obsessed. Playdates at our home become instructional lectures as friends gather at his feet while he demonstrates new Minecraft innovations on the computer. Polite chit-chat with a diner waitress quickly evolves into an in-depth discussion of why she should love Minecraft like he does. Playing Minecraft is not enough—now he urges me to record his own mod reviews and post them on YouTube, and he sounds eerily prepared for his presumed global audience of Minecraft acolytes eager for his analysis: “Hey guys! Back again with a new mod I want to show you. Let’s dive in.”

I try to remember the things I played with at his age. Is it better for a developing mind to watch a real, battery-powered toy robot stomp army men than seeing a video-game robot do the same thing to virtual soldiers? Is it more inspiring to work within the constraints of limited supply when building with real Lego blocks—or is the imagination unleashed by the infinite variety of limitless computer blocks? How will he manage to save all of these digital creations to look back on when he’s older?

Thankfully, such worries evaporate as soon as he runs out the door to go swimming or jump on the trampoline or hunt fireflies. But lately, he’s also been playing a new game with Minecraftian fervor: Roblox. And it involves microtransactions.